The first article in our new series on Presidential Error Coins.

This is the first in our new article series featuring Presidential $1 Error Coins that have been submitted to NGC for certification. Most collectors of U.S. coins are already well familiar with the Presidential $1 Coin program. Each year, four U.S. Presidents are honored as their likeness appears on the obverse of a circulating dollar coin. The coins are issued approximately every three months in the order that the Presidents served, and the coin series is expected to extend until 2016.

The size, weight, and metallic composition of these new dollar coins are identical to the Sacagawea dollars (which are being minted concurrently). New to this series is the use of edge lettering. Some of the standard U.S. coinage legends as well at date and mintmark have been moved to the coin’s edge.

Thus far we have seen literally dozens of variations in the spacing and amount of inscriptions appearing on the coins’ edges. To start, this is what the edge of the coin should look like: 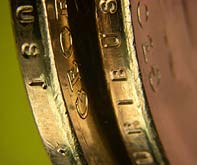 Two George Washington dollar coins, edge view, showing opposite orientations of edge lettering.
At left the edge is read with obverse up, at right the edge lettering is properly oriented with reverse facing up. Click to enlarge

A closed up view of date and mint mark on the edge of the George Washington $1 Coin.
Click to enlarge

Now here is a sampling of the George Washington Dollar error coins that we have seen to date. The first group of errors show improperly spaced edge letters and partial edge letters. This occurs when the coins "slip" as they are run through the edge lettering machine. In some cases these errors are accompanied by Mint caused damage as the coins "slip" in the edge die. Note that to be recognized by NGC as Mint Error, the improper spacing must be significant and noteworthy.

Improperly spaced edge lettering. Note the wide gap between TRUST and the date preceding the date.
The mint mark overlaps the start of E PLURIBUS UNUM. Click to enlarge

Partial edge lettering. The motto IN GOD WE TRUST is missing.
Click to enlarge

Partial edge lettering. IN GOD WE TRUST and UNUM missing.
Click to enlarge

Partial Edge lettering. Several portions of the edge legends are missing, and mint caused damage is evident.
Click to enlarge

Since the edge lettering is applied in a second step after the coins are struck, it is possible for a group of coins can skip this critical step and go straight to bagging. These coins will display a blank edge, which NGC describes as MISSING EDGE LETTERING. Many thousands of George Washington gold coins did, in fact, miss this step and were released without the edge lettering.

Please be aware that since all of these error coins currently have a numismatic value greater than the face amount on the coins, "alterations" made to deceive collectors are being made. For more information about edge alterations please refer to the article Altered Washington Dollars Surface posted on the NGC website.

In addition to edge lettering errors, other error types have also surfaced. The Washington dollars are composed of the same three-part clad layers as the Sacagawea dollars, and similarly missing clad layers exist. Planchets missing layers are thinner that normal planchets and, therefore, these errors show a noticeable weakness in the design especially along the edge of the coin. These errors can be dramatic because the pure copper center of the coin is exposed. This bright red is a sharp contrast to the "golden" appearance on the other side of the coin. Here are photos of missing clad layers: 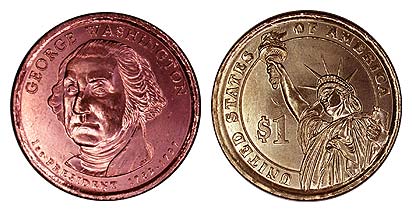 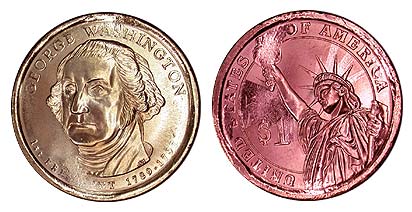 Alterations to make a Presidential $1 Coin appear to be missing a clad layer will involve plating the coin to give it a copper appearance. A simple weight test will reveal the added metal, as the weight of an altered piece will exceed Mint tolerances.

A planchet may also pick up a coating if it is improperly annealed. This is a somewhat common error but one that is very difficult to authenticate. Improper annealing is often confused with toning coins. Unfortunately, improperly annealed planchets can take on a variety of colors from black to copper red. They are caused by over heating the planchets.

Since these coins are struck on presses that use lubricants such as oil and grease, it is common for dirt and grime to inadvertently adhere to the dies. This causes the dies to be clogged or filled. The struck coin will bear weakness on the devices. Again since this is a fairly common occurrence to some degree, NGC only recognizes those that show a major portion of missing detail. (Photo #7a, #7b.) 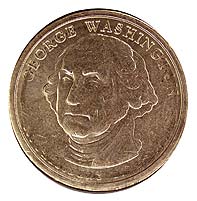 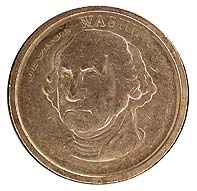 Since Presidential dollar blanks (type 1 and 2) and planchets are indistinguishable from those of Sacagawea’s, we do not make a distinction. Blanks or planchets without edge lettering that are submitted will be labeled as follows: (2000-2007) $1 blank or planchet. (Photo #9.)

A new type of error that is possible with this series is an edge lettered blank or planchets. NGC has certified this new error. (Photo #10). NGC has also certified a similar lettered edge planchets with weakly lettered edge. (Photo #11a., 11b.)

Clipped planchets are another relatively common error often seen on coins, but are encountered far less frequently on the dollar coins. Thus far curved clips on the George Washington one dollars are rare. It is interesting to note that there is no lettering not only, as expected, at the area of the clip, but also directly across from the clip (in what is known as the Blakesley effect area). This is because the clipped area does not provide sufficient pressure to have the lettering applied by the edge die. 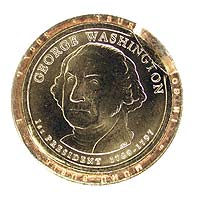 Photo #12b: 5% curved clip, a close up of the clipped arc. Note how the metal on the letters ‘NGT’ flows toward the clipped area. Click to enlarge

Coins showing multiple errors are usually very rare and this one is no exception. Not only is this George Washington gold dollar missing the reverse clad layer, it also did not pass through the edge lettering machine. 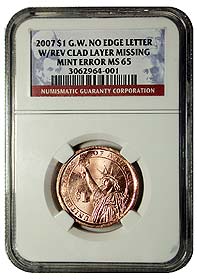 Photo #13b: Missing reverse clad layer and missing edge lettering, detail of the coin’s edge as seen in the EdgeView ™ Holder. Click to enlarge

Another intriguing error in this series shows doubled edge lettering. This occurs when a coin passes twice through the edge lettering machine. Because this error appears to occur more frequently on the John Adams $1 than the George Washington $1 coin, detailed information can be found in our article on the second coin in the series, the Adams $1.

Photo #14a: Obverse and edge view of a Washington $1 with overlapping doubled edge lettering. Click to enlarge

Photo #14b: A close up of the edge showing two sets of edge lettering. Here a portion of the date and mintmark,
'07 P,' are seen to overlap with 'URIBU' of E PLURIBUS UNUM. Click to enlarge

Photo #14c: A second close up of the doubled edge lettering. Click to enlarge

Want to know how much is a George Washington Dollar coin worth? See the coin's value on NGC Price Guide.