This is the second article in our series on Presidential Error Coins, focused on John Adams Dollar.

Just like the Washington $1 coins, the Adams coins show an abundance of edge lettering errors. The first errors to surface for this issue were doubled edge lettered coins. This error occurs when a coin passes through the edge lettering machine twice. These come in two variations which are recognized by NGC:

Here are some photos of doubled edge lettering. Again, the variety of positioning and orientation of the letters is essentially limitless.

Another error that we have seen occurs when a coin has missed the edge lettering process entirely, and therefore has a blank edge. NGC certifies this Mint Error as MISSING EDGE LETTERING.

With the Washington dollars, we saw some of the errors that exist for virtually every modern coin type. These include errors such as filled dies and rotated dies. Dirt, grease or other material can adhere to the die during minting. The filled portion of the die does not impart detail to the struck coin. Errors of this type are labeled as OBV STRUCK THRU.

Rotated dies can be either minor (within mint tolerance) or major. This error occurs when the die turns during striking or when the dies is inserted improperly into the coinage press. The Adams dollars has been found with varying degrees of rotation unlike the Washington where, to date, only one variation has been seen. For some examples on the Adams dollar, this rotation resulted in “medallic” alignment versus the correct, “coin” alignment. Medallic alignment occurs then the dies are rotated a full 180 degrees. The illustration below shows various types of alignment. NGC will designate rotated dies when the rotation is equal to or greater than 15 degrees. 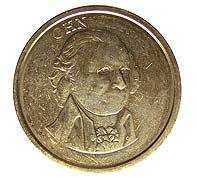 John Adams $1, obverse struck through. The dies are filled with grease, dirt, or metal particles
causing a significant loss of design. Click image to enlarge. 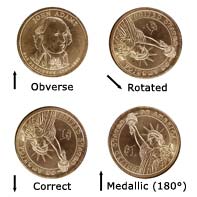 A variety of rotated dies errors have been submitted to NGC.
This illustration describes various type of rotation. Click image to enlarge.

This next coin is new to the series. On this coin, the edge lettering die seems to have been inadvertently laser-etched, making the entire edge of the coin appear frosted or matte-like. At first glance, without putting a loop to the coin, the edge appears simply less shiny than normal coins. Magnification of the edge of the coin reveals the lines associated with laser etching. While NGC is not recognizing this the matte edge Adams $1 at this time, we are currently investigating it for attribution.

Comparison of “matte” edge with normal edge.
The regular coin appears at type, and the frosted version at bottom. Click image to enlarge.

A close up of the date portion of the edge and parallel lines
suggesting laser etching. Click image to enlarge.