NGC has engineered a new holder which suspends a coin within prongs to enable viewing of its edge. This holder is made from the same high-quality, inert materials as the regular NGC holder, and differs by the addition of four small cutaway windows that surround the coin. This addresses a need long felt by collectors of edge varieties which are especially important in several series, including pattern coins, territorial coins and Bust Half Dollars.

The first coin to be encapsulated within this holder is a 1907 Large Edge Letters $20, graded PR64 by NGC. Although all proof 1907 $20’s are very rare, this Large Edge Letters variant is believed to be unique. The collar with which this coin was struck was used for the high relief issue, and the edge letters are noticeably larger than then those seen on most Arabic Numerals (or low relief) issues, including other known proofs. In this instance, the edge detail is especially noteworthy, and the NGC’s holder with pronged core insert allows the edge to be seen.

This coin formerly resided in the Trompeter Collection, and most recently in Phillip H. Morse Collection of Saint-Gaudens Coinage. It was sold by Heritage Galleries & Auctioneers in early November of this year. Jim Halperin, Co-Chairman and CEO of Heritage, comments that, "I think NGC's holder showing the coin’s edge visible is a terrific product that will help make the study of numismatics even more interesting."

The development of this holder continues NGC’s role as a leader and innovator in rare coin certification and encapsulation. In 2001, NGC first introduced its coveted Star Designation for coins with superior eye appeal. In mid-2002 NGC released the popular Multi-Coin Holder which provides collectors an option to have a set of up to six certified coins encapsulated within one holder. And in early 2003, NGC extended the Prooflike (PL) and Deep Prooflike (DPL) designations to business strike coins of all series.

This holder is currently available only by request and for coins with special or unusual edge attributes. It is not available for coins of all denominations, nor all foreign coins. 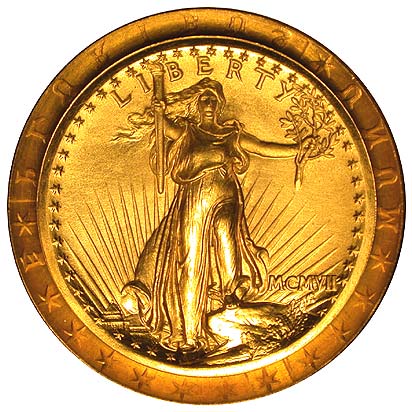 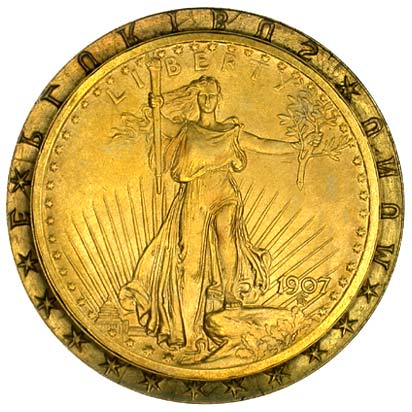 1907 Large Edge Letters $20, graded PF 64 by NGC, photographed with its edge lettering. Comparison shows that this letter edge is identical to that seen on the high relief issue. Coin and edge image by David J. Camire 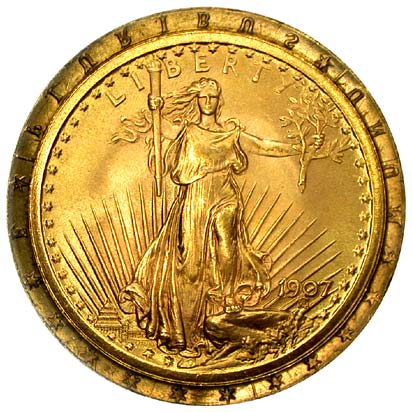