In an effort to preserve important artifacts of the hobby’s history, Numismatic Guaranty Corporation will begin grading silver dollars still sealed within their rigid GSA holders. This move is in response to the ongoing loss of these holdered coins, as collectors have come to recognize the historic value of the coin and holder combination. Over the years, many have been lost forever when the coins they contained were broken out to be submitted for grading. By combining the best of both worlds, NGC hopes to encourage owners of these coins to preserve the GSA holders for posterity. NGC’s grading of GSA-holdered silver dollars is set to kick off with the annual coin show of the Florida United Numismatists (FUN) in Orlando, January 8-11, 2003.

The General Services Administration (GSA) was responsible for sorting and marketing the U. S. Treasury’s hoard of silver dollars, after the Treasury ceased issuing dollar coins in 1964. In a series of sales lasting from 1973 to 1980, this hoard of several million silver dollars, mostly Morgan Dollars minted at Carson City, was dispersed via auction and fixed prices. Sealed in rigid plastic holders and boxed with a message from then President Richard M. Nixon, these silver dollars account for most of the mint state ‘CC’ Morgans known today.

Veteran numismatists may remember the great rush on silver dollars that occurred during the early 1960s. For generations these coins had laid undisturbed in Treasury and Federal Reserve vaults, serving primarily as a backing for silver certificates. When, in 1935, Congress changed the written obligation appearing on silver certificates so that the notes could be redeemed “in silver” instead of in “silver dollars,” production of these coins ceased. Only in the far western states were silver dollars used in daily commerce, and even collectors showed little interest in Morgan and Peace Dollars. Starting about 1958, however, the number of silver dollars being withdrawn from government vaults increased annually, reaching a fever pitch in 1963-64 following the discovery of previously scarce dates. Lines stretching for blocks formed around the Treasury Department headquarters in Washington, as speculators bought up silver certificates to redeem them for $1000 bags of “cartwheels.” In March of 1964 the Treasury, having discovered many bags of scarce ‘CC’ dollars, stopped redeeming silver certificates with silver dollars, offering bars or granules in their place. After June 24, 1968 the redemption of silver certificates in silver ceased altogether, though the notes remain legal tender to this day.

After the Treasury took stock of its remaining silver dollars these coins were turned over to the General Services Administration for disposal at a profit to the government. The GSA sorted the coins into several categories, the most populous of which was “Uncirculated CC.” These were offered by date for issues of which several thousand or more were available. Those ‘CC’ dollars with low quantities available or that did not qualify as uncirculated were lumped into a “Mixed CC” category. Non-CC dollars and circulated pieces were included in the hoard, too, but many of these were packaged in flexible plastic envelopes rather than the rigid plastic holders most collectors associate with the GSA hoard.

NGC Grading Finalizer John Maben is quoted as saying, “The GSA dollars have long been a favorite item of collectors. Many feel the GSA holder itself adds a certain romance to owning them and makes the coins more desirable and collectable. To others, having an independent grading opinion from NGC is of equal or greater importance, which is why a great number have already been removed from their government holders.”

NGC will provide the same information that it does for its normal grading services, but this information will appear on an oversize label that wraps around the rigid GSA holder. Also applied to the government holder will be a tamper-evident seal. Both features will serve to discourage opening of the holder but, because the coins are not in NGC holders, NGC cannot guarantee the grades it applies to these GSA dollars. For the time being these grades will also be excluded from the NGC Census Report, though this policy may be changed in the future.

John Maben expanded on the company’s policy: “In rendering a grading opinion without removing the coin from its holder we manage to satisfy both those who like the original holder and those who want an NGC grading opinion. In talking to various dealers and collectors we believe there will be high demand for this unique service, even though the coins are not in NGC holders and therefore not guaranteed by NGC."

NGC will have a prototype of its graded GSA dollar on display at the FUN show and will begin accepting coins at that time. GSA dollars may be submitted under any NGC tier at the Economy level or higher, excluding Gold Rush and Specialty Gold. The usual minimum numbers and value limits apply for each tier, and non-GSA coins cannot be included to achieve the minimum numbers. All GSA dollars must be submitted on invoices separate from other submissions. Please do not submit GSA dollars with their accompanying cardboard boxes. NGC cannot be responsible for these boxes and will not be holding or returning them. Please keep your boxes until the coins are returned. 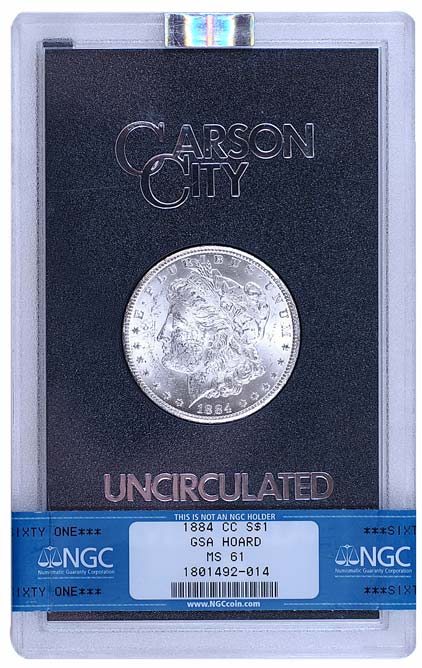 NGC will also be accepting bulk submissions of GSA dollars, with a minimum submission of 100 coins for this service. Mixed dates are acceptable, and submitters may specify a minimum grade of MS-65 or less. There will be a $3 per coin fee for those pieces not meeting the specified minimum grades. NGC strongly encourages submitters to furnish a minimum grade, as the label applied by NGC to the GSA holders cannot be removed without the possibility of leaving behind adhesive residue and/or paper which may impair the attractiveness of the holder.