After three years of research and writing, the third volume in David W. Lange’s series of books chronicling the publishers of coin albums and their product lines is set for an August 1, 2020 release. The book is titled Coin Collecting Albums, A Complete History & Catalog: Volume Three, Whitman Publishing Company Folders and Albums 1940-1978. 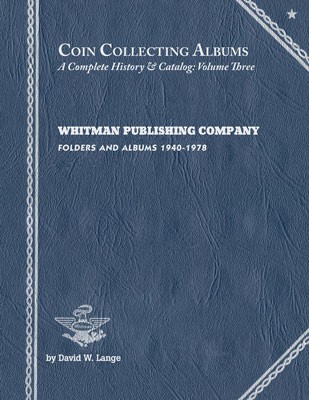 At 335 pages, it is the largest book in this series to date. There are more than 1,500 photos, articles and vintage advertisements, most of them in full color. The book is printed on 100# glossy stock, with an illustrated hard cover and Smythe sewn case binding to last for generations. The book’s cover actually reproduces the image of a Whitman coin folder from the 1960s, and the cover text utilizes the very same fonts that are immediately recognizable to veteran coin collectors.

The book relates the history of Whitman Publishing Company from 1916 to the 1990s, when it underwent several changes of ownership to emerge as the still powerful force in the hobby that it is today. All of Whitman’s coin folders, albums and cards produced from 1940 through 1978 are given their own chapters, with complete histories and catalogs featuring every single title, edition and variety. These are identified with unique Lange Numbers for easy reference and trading between collectors. Every subtle detail is described and illustrated, revealing how truly complex these seemingly simple products really are. Among the highlights of this new book are several prototype products from the author’s collections that hitherto have been unknown to the hobby. These include the very first Whitman Blue Folder from 1940, an artist’s mock-up featuring two different proposed designs, one on either side of its covers. Also fully described and illustrated is the prototype for Whitman’s immensely successful Bookshelf line of albums that so dominated this market from 1961 to the late 1970s. The Bookshelf’s projected successor is also revealed for the first time, a failed experiment from the mid 1970s that was abandoned in favor of Whitman’s present Classic line of albums.

Sections are devoted to the many printing and binding errors the author has collected over several decades, and these are attractively illustrated. Sidebar stories are devoted to the many custom printed folders and albums that Whitman has produced for various coin and medal programs going back as far as 1954. Finally, an extensive selection of Whitman coin collecting accessories is described and illustrated. These include numerous coin check lists, decal sheets, tubes, storage boxes, coin collecting kits and the very rare “Coin Store” board game from 1962. All of these are displayed in multiple, full color photos that recall the coin hobby during its heyday of the 1960s.

David W. Lange has been collecting coin hobby products and memorabilia for 40 years, and he is the premiere expert in that field. In 2007 Lange launched his series of books relating the history and product lines of various coin supply publishers with his book on vintage coin boards of the 1930s and 1940s. For that project he established his own publishing imprint, PennyBoard Press™, and he thereafter produced a series of books detailing all the publishers of coin folders and albums. Volume One covered the National Coin Album and associated products, while Volume Two was dedicated to albums of the Coin & Currency Institute, specifically Library of Coins and Treasury of Coins. This new volume on Whitman’s several product lines is just the latest entry in what is projected to be at least half a dozen titles before the series is complete.

The publication price of Volume Three is $75, but until August 1, 2020 Lange is offering a pre-publication sale price of just $65, plus $7 shipping. The book is expected to be ready for delivery at that time.

Books may be purchased by check made out to David W. Lange or via PayPal to davidwlange@outlook.com. His mailing address is POB 110022, Lakewood Ranch, FL 34211. The PennyBoard Press™ website is coincollectingboards.com, and it features extensive information about and photos of vintage coin boards.

This is a guest article. The thoughts and opinions in the piece are those of their author and are not necessarily the thoughts of the Certified Collectibles Group.