Numismatic Guaranty Corporation has graded and encapsulated the collection of commemorative half dollars formed by retired football star Greg Bingham. These coins include some of the finest certified individual pieces, while collectively they represent the ultimate in quality for this very popular series.

The Bingham Collection will be on display at NGC's table during the ANA Convention in NYC. 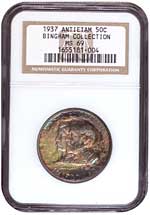 Numismatic Guaranty Corporation has graded and encapsulated the collection of commemorative half dollars formed by retired football star Greg Bingham. These coins include some of the finest certified individual pieces, while collectively they represent the ultimate in quality for this very popular series.

Consisting of 52 pieces, this collection includes no less than 31 specimens that have been awarded the NGC star (

), a feature unique to NGC-certified coins that identifies pieces displaying superior eye appeal. The grades represented within this collection are truly amazing: Some 13 coins are graded MS 68, while one, the 1937 Antietam half dollar, achieved the lofty grade of MS 69.

Among the important highlights of the Bingham Collection are his two 1892 Columbian Exposition half dollars. One is certified MS 67

, while the second is one of just 100 proofs made and grades an astonishing PF 68 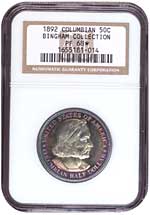 Also included within this remarkable collection are the very popular Norse-American centennial medals of 1925. Frequently collected alongside the commemorative half dollar series, there are several varieties of this scarce medal. The silver examples in the Bingham Collection feature both thick and thin planchets and each grade MS 66, while the rare gold striking is a stunning Matte PF 68.

Greg Bingham played for the Houston Oilers for 13 years and has been a coin collector for the past 30 years. His stated goal in collecting is "to get the most beautiful coins." He's been extremely successful with respect to his commemoratives, most of which feature delightful toning. "I think toned coins are like art," Bingham said in an interview with NGC Research Director Dave Lange. "I look at my collection as sort of a 'Miss America' contest." 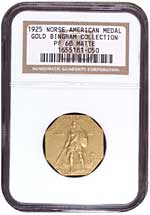 The remarkable Bingham Collection of United States commemorative half dollars will be on display at NGC's table during the New York City convention of the American Numismatic Association. Attendees are invited to come view this superb group of coins during show hours. A complete roster of the Bingham Collection will appear in the July issue of NGC's quarterly Census Report, which is available from the company at $25 postpaid. The Bingham coins also appear within NGC's online census at www.NGCcoin.com.

Click here to view additional coins in the Bingham Collection.