Chinese Coins: The Panda Coin That Nobody Knew

There are Panda coins that make headlines and Panda coins that don’t. For instance, the kickoff for the approaching year’s Pandas is always a big deal. Last November, the 2018 Panda Launch was held at the Hyatt Regency Hotel across the street from the Beijing International Coin Expo. To get to the Hyatt from the China National Convention Center, there’s no need to walk outside in the cold; a covered bridge connects the two buildings. The Panda Launch ceremony, complete with dance routines, videos and prizes, always draws a crowd and news media.

This year’s presentation opened with a dance routine. The performers were not professionals, though, but children around 6-8 years old dressed up in Panda outfits. It looked like a pajama party and was every bit as charming as you might imagine.

Next was a technical presentation by Cheng Chao, the Nanjing Mint artist for the 2017 and 2018 Panda coins. He is the discoverer of a new technique to impress more detail in low relief coins. Mr. Cheng explained the relationship between living pandas and the numismatic artwork we see on the 2018 Panda coins. His words were supported by an exhibit in the rear of the hall. In it was the original clay relief that eventually was turned into the mold for all the 2018 Panda coins.

Speeches, more speakers and an impressive Panda promotional film followed. As always, the event ended with a contest. This one used three electronic slot machine wheels that spun through the WeChat avatars of attending guests. If the wheels stopped on your phone image, you won a silver 2018 Panda coin!

The Chinese media covered the event and millions of people probably saw snippets on the news, or in their newspapers. Few coins benefit from as much promotion as Pandas do.

The 2018 gold and silver Pandas were not, however, the only ones released late last year. From September 8-10, the third China International Collection Expo was held in Nanjing. Its purpose was to “Let Chinese Culture Go Abroad.” Five exhibits there covered: the Chinese Dream; stamps, or philately; design drafts for stamps; an invitational exhibition of Chinese stamp designs; and an art on paper exhibit. During the three-day festival, exhibitors from more than 40 countries exhibited collections of artwork, antiques and stamps to the public.

You might notice that there is no mention of coins in this description. Nevertheless, China Gold Coin released a special 30 gram 10 Yuan Panda coin to commemorate the event. It features the same design as the standard Pandas for 2017, except the words “China International Collection Expo” are placed in a ring around the Panda design. The maximum mintage is 50,000 coins and it was struck at the Shanghai Mint. 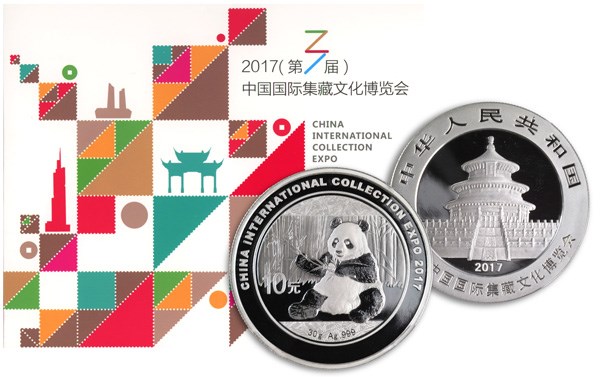 The large mintage figure gave me confidence that I could pick up one of these coins in Beijing. So, one afternoon, I stored a photo of the coin in my phone and headed off to Madian, Beijing‘s main coin market. This two-story numismatic center is filled with hundreds of coin, paper money and stamp dealers. I first visited a shop near the entrance that I had bought from previously. Its showcases are filled with an array of modern Chinese coins.

I displayed the photo and asked if they had this coin.

Impossible, I thought, as I waited for the dealers to produce one. What they brought me was a regular 2017 silver Panda. I showed them the photo again.

It was the same at every store, meiyou, or nothing. One dealer sent a scout all through the coin market to find one. Nobody had ever seen it. Meiyou.

As I left Madian, I called a friend at Lugong, the grand coin market in Shanghai. It took around 30 minutes to check, but then the answer came back, “Meiyou, nobody has this. You can try to order it at a large post office.”

I ended up getting the coin online (graded NGC MS 69) from one of the small band of Chinese medal dealers who deal on eBay. The NGC Census shows 16 graded. China Gold Coin has it listed on their website, but for a legal tender Panda this is truly the coin that nobody knew.