The label features a likeness of the South African anti-Apartheid leader.

Numismatic Guaranty Corporation® (NGC®) has created a special label for South African coins that honor anti-Apartheid leader Oliver "O.R." Tambo. The label, available by request to all customers for an additional fee, features a likeness of Tambo with a South African flag in the background.

The label can be used with the four coins issued by South Africa in 2017 to celebrate the centenary of Tambo's birth: a proof 1-ounce gold 500 rand, a proof 1-ounce silver 50 rand, a 50 rand and a 5 rand. 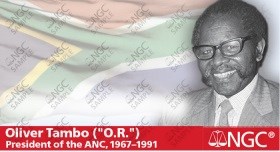 Tambo passed away in 1993, as the Apartheid era was ending. Today, millions of travelers to South Africa pass through O.R. Tambo Johannesburg International Airport, that nation's busiest.

To request the Oliver Tambo label for a qualifying coin, write "Tambo Label #967" on your submission form. There is an additional fee of $5 per coin for the label.