Numismatic Guaranty Corporation (NGC) has certified an extremely rare 1915 Panama-Pacific “Double Set.” The set, one of the rarest and most remarkable items in all of American numismatics, will be sold by Heritage Auctions in January.

In 1915, San Francisco hosted the Panama-Pacific Exposition, a World Fair that celebrated one of the greatest feats of American engineering: the opening of the Panama Canal. The San Francisco Mint struck five commemorative coins to support the fair, including a silver half dollar, a gold dollar, a gold quarter eagle, a round gold $50 and an octagonal gold $50.

Most notable were the round and octagonal gold $50s, the largest gold coins ever struck by the US Mint. While these two coins are the pinnacle of any collection of classic commemoratives, all Panama-Pacific issues are highly sought by collectors for their low mintages and exquisite artistry.

The Panama-Pacific commemoratives were originally sold both individually and in sets. A single example sold for about double its face value. A three-coin “small set” without a gold $50 sold for $7.50, a four-coin set with only one of the gold $50s was sold for $100 and a five-coin set with both gold $50s was sold for $200. The premier offering was a 10-coin “complete double set” that contained two examples of each coin for $400.

Housed in a beautiful copper and glass frame with a velvet interior, the double set was truly extraordinary. It was also expensive, and less than a dozen of these sets were sold. Even fewer have survived.

NGC Chairman & Finalizer Mark Salzberg recalls having seen one 30 or 35 years ago but not having the opportunity to examine it in hand. As a result, the submission of this set stoked a particularly strong reaction from the seasoned grader, who described his examination in detail:

The coins were encapsulated by NGC with the pedigree “Original Double Pan-Pac Set” noted on the certification label. A list of the coins and grades follows:

All 10 coins will be sold as part of Heritage Auctions’ FUN Platinum Night, held Jan. 6 in Tampa. The original case is also for sale. View the auction at HA.com/1271 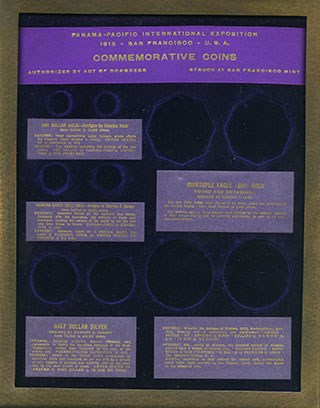