His designs have been selected for more than 50 US coins and medals.

Numismatic Guaranty Corporation® (NGC®) has announced that Joel Iskowitz, a prolific designer of coins and medals worldwide and one of the few living artists to have his artwork displayed in the US Capitol, the Pentagon and the White House, will individually autograph certification labels exclusively for NGC.

In 2005, Iskowitz was accepted into the US Mint Artistic Infusion Program (AIP), which had been established two years earlier to bring additional talent and diversity to the US Mint. His designs have been selected for more than 50 US coins and medals, an astonishing — and still growing — number.

Besides his work with the US Mint, Iskowitz is the only American to have designed the portrait of Queen Elizabeth II that has graced the coinage of the British Commonwealth. He has designed a number of private medals and more than 2,000 stamps for 40 nations.

An accomplished painter, his work is represented in major museums, both in the US and Europe, including the Kennedy Space Center Museum, the Historical Museum of Carentan, France, and the US Air Force Art Collection. His numismatic art is found in the permanent collections of the Smithsonian Institution, the September 11 Memorial & Museum and the National World War II Museum. 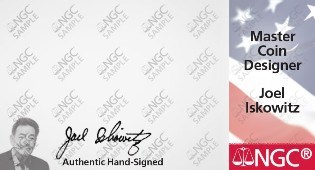 “Joel Iskowitz is one of the most accomplished coin and medal designers of the last decade with an impressive body of work that covers some of the most important subjects and people in American history,” says Mark Salzberg, chairman of NGC. “We are very fortunate to be able to work with an artist of his caliber.”

“I am honored to join the other accomplished artists in NGC’s Signature Labels program,” says Iskowitz. “I look forward to working with NGC on these unique collectibles.”

NGC has previously announced signature deals with Kenneth Bressett, the longtime editor of A Guide Book of United States Coins; the Hon. Gov. Mike Castle, a former congressman known for important coin legislation such as the 50 State Quarters program; and John M. Mercanti, the 12th Chief Engraver of the US Mint and designer of the American Silver Eagle reverse.