The former principal deputy director of the US Mint will hand sign NGC certification labels.

Rhett Jeppson, the first Principal Deputy Director of the US Mint, has agreed to autograph certification labels exclusively for Numismatic Guaranty Corporation® (NGC®). 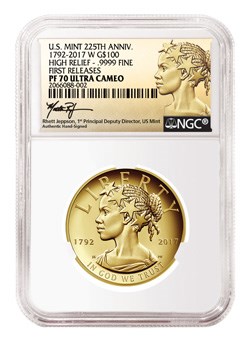 Jeppson helmed the US Mint from January 2015 to January 2017 in his capacity as Principal Deputy Director, and on May 19, 2015, he was nominated as Director of the US Mint. Under his watch the US Mint released a number of popular special issues, including:

Before leaving the US Mint in January, Jeppson laid the groundwork for the production and release of the 2017 American Liberty US Mint 225th Anniversary Gold $100. It is the first coin to portray the allegorical figure of Liberty, which has graced United States coins since 1792, as an African-American woman. This groundbreaking coin was covered extensively in news reports when it was announced earlier this year.

The American Liberty US Mint 225th Anniversary Gold $100 is scheduled to be released on April 6 and will be struck in high relief from one ounce of .9999 fine gold with 225th ANNIVERSARY in raised letters on the edge. It will be followed by a silver medal released mid-year and a set of silver medals released at year’s end. 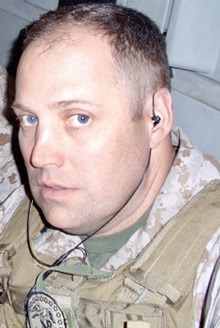 Prior to his appointment as the Principal Deputy Director of the US Mint, Jeppson served as the Acting Chief Operating Officer of the Small Business Administration, where he was also the Associate Administrator of Veterans Business Development. A veteran himself, Jeppson joined the US Marine Corps in 1987 after he received his Bachelor’s Degree from the University of Florida.

“We are honored that Rhett, a distinguished veteran and chief administrator of the US Mint, has agreed to autograph labels for NGC,” says Mark Salzberg, Chairman of NGC. “The pairing of labels hand-signed by Rhett with the important coins released under his watch will create particularly special collectibles.”

“NGC’s innovative programs, such as its authentic hand-signed labels, have brought many new collectors into the hobby and I am eager to build on this success,” adds Jeppson. “I look forward to working with NGC to expand the coin collecting hobby to appeal to more diverse demographics.”