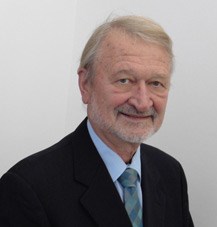 Harbuz holds the distinction of being the only person in history to have served as director of mints in two different countries. From 1995 to 2001 Harbuz served as Managing Director of the South African Mint, a position equivalent to Mint Director. Two years later, in 2003, Harbuz was selected as CEO of Gold Corporation, which operates the Perth Mint of Australia. Harbuz retired from the Perth Mint last year.

Under Harbuz’s leadership, the Perth Mint developed into a global powerhouse for modern coins. The Perth Mint has been—and continues to be—extraordinarily innovative, releasing a multitude of diverse commemorative coin programs that boast novel subjects and designs, including popular movies, animals and landmarks.

In addition, it utilizes the most advanced coining technologies to strike coins with features such as embedded jewels, colorization, antiquing and selective gilding as well as to issue coins in a variety of unique shapes. One recent issue of Perth, for example, is struck on a planchet that is shaped like Australia.

NGC has graded hundreds of thousands of coins issued by the Perth Mint. Now, NGC can pair these coins with labels hand-signed by Harbuz, creating a unique collectible with enhanced appeal. 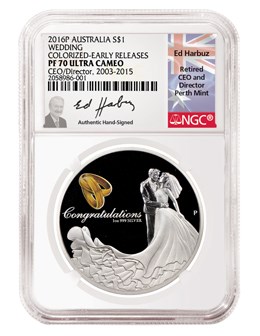 Although the South African Mint does not issue as many types of coins as the Perth Mint, it is particularly famous for one modern coin—the Kruggerand. First introduced in 1967, many numismatists consider the iconic Kruggerand to be the first gold bullion coin of the modern era, having predated American Gold Eagles by nearly 20 years.

In addition to the Kruggerand, the South African Mint issues several commemorative coin types such as its Natura and Protea series. It also strikes all of the circulation issues for South Africa.

“NGC is honored to be able to work with Ed Harbuz, who quietly made an enormous impact on the world of modern coin collecting during his years at the South African and Perth Mints,” says Steven R. Eichenbaum, CEO of NGC. “We are excited to be able to recognize his impact with this hand-signed label program.”

Coins graded by NGC and encapsulated with labels individually hand-signed by Ed Harbuz will be available from select retailers starting in March.