The former director of the US Mint will hand sign NGC certification labels.

Edmund C. Moy, the 38th Director of the US Mint, will individually autograph labels for Numismatic Guaranty Corporation® (NGC®) under an exclusive arrangement. Moy served from 2006 to 2011 as Mint Director, a position which has since been vacant. 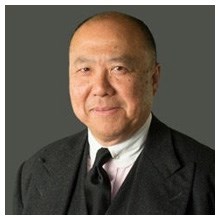 Prior to his appointment as Director of the US Mint, Moy was a member of the White House staff and worked for nearly six years as a Special Assistant to the President for Presidential Personnel, tasked with recommending candidates to serve in the Cabinet department and independent agencies. Moy was at the White House during the September 11 attacks and was subsequently privileged to be a part of the efforts to form the US Department of Homeland Security.

A coin collector for most of his life, Moy first became fascinated by different coin designs when he worked the cash register at his parents’ Chinese-American restaurant in Waukesha, Wisconsin. His appointment as Director of the US Mint fulfilled a childhood dream and put Moy at the helm of the world’s largest manufacturer of coins and medals. 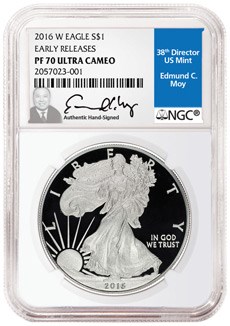 In Moy’s first year as Director, the US Mint struck 16.2 billion coins for circulation and sold $1.04 billion in numismatic collectibles. As one of the few profitable US government agencies, the US Mint transferred $750 million to the General Fund of the US Treasury that year.

Moy led the US Mint at a time when it launched many exciting new coins for collectors. His term started just as the Mint was releasing the hugely popular 20th Anniversary Silver and Gold Eagles.

During his tenure, the US Mint would experiment with other new coins and series aimed at increasing interest in modern coin collecting, including Reverse Proof finishes, the 2009 Ultra High Relief $20 and other interesting issues. Moy also oversaw the launch of the Presidential Dollar program in 2007 and the America the Beautiful Quarters program in 2009 as well as completion of the monumental 50 State Quarters program.

Near the end of his five year term he left his position as Director of the US Mint to become an executive with a publicly-traded energy firm. A lifelong coin collector, however, Moy quickly got involved in numismatics again and in 2013 he wrote the reference book American Gold and Platinum Eagles. 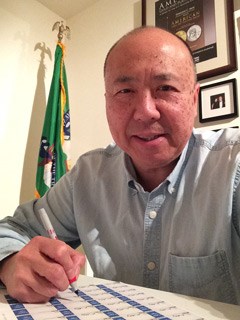 Moy has now partnered with NGC to create limited-edition certification labels that will be individually hand-signed by the former Mint Director. These autographed labels will be encapsulated with modern coins to create a distinctive and attractive presentation.

“I am very pleased to join NGC and work with the great team they have put together. NGC’s reputation for quality, integrity and attention to the customer meets my high standards. I look forward to providing my signature exclusively to NGC and exploring other opportunities to grow the coin collecting hobby.”

“Ed Moy helped to elevate and expand the hobby of modern coin collecting during his tenure as US Mint Director,” says Steven R. Eichenbaum, CEO of NGC. “We are very grateful that he has agreed to work with NGC to create this exciting autographed label program.”