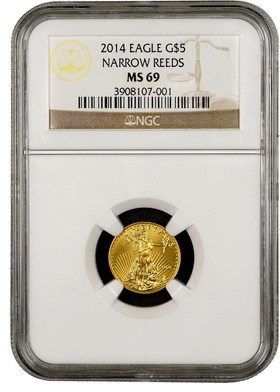 NGC announced in late January that it had identified two distinct edge varieties of 2015 $5 One-Tenth Ounce Gold Eagles, coins with wide and narrow reeds. The variety called “Wide Reeds” is the standard reed-style used in previous years. The variety designated as “Narrow Reeds” display tight, fine reeding that had not been seen on $5 Gold Eagles previously. Now NGC has authenticated and graded two examples of the 2014 $5 Gold Eagle with Narrow Reeds.

The coins were submitted by Darrell Hicks of Raleigh, NC. He was reviewing coins in his collection that he intended to sell when he discovered the two 2014 coins with narrow reeds. He was aware of the 2015 coins, but had not heard of reports of coins dated 2014. He called several dealers to inquire if they had encountered these coins before, and none had. Hicks was encouraged, however, because dealers he spoke to believed that it was possible that they existed. He brought the coins to Golden Isles Coins in Raleigh, who sent them to NGC for certification on his behalf to confirm his discovery.

After the initial discovery of 2015 wide and narrow reeds coins, CoinWorld contacted the US Mint. They confirmed that various collars were used to strike these coins, and the Mint did not deem them errors but varieties. They further stated that several thousand were produced. At that time, Numismatist Thomas K. Delorey recognized that the narrow reeds variety matched the fine-reeding style of the $5 Tenth-Ounce Gold Buffalo coin, last produced at West Point in 2008.

As with the 2015 issue, it is believed that the 2014 Narrow Reeds $5 Gold Eagle is much scarcer than the Wide Reeds variety, although the relative rarity of each is very much unknown. To date, NGC has certified 12,724 examples of the 2015 $5 Gold Eagle, of which only 1,747 have narrow reeds variety. Certainly collectors should be reviewing all $5 Gold Eagles issued from 2008 to 2015 to look for examples with Narrow Reeds as more are waiting to be discovered.

Submitters may request that NGC attribute the “Narrow Reeds” varieties for 2014 and 2015 $5 Gold Eagles on the NGC certification label by selecting VarietyPlus® on the NGC submission form. There is a $15 attribution fee for the VarietyPlus® service. Contact NGC for bulk submission rates and guidelines.