NGC is offering a new certification option for Presidential $1 Coins packaged in United States Mint Official American Presidency $1 Coin Covers. NGC will grade the enclosed coins and seal the entire U.S. Mint cover within a clear semi-rigid plastic sleeve. This allows the U.S. Mint packaging to be preserved while receiving the advantages of an NGC certified grade.

A label across the top of the holder describes the cover and enclosed coins. If the coins are of matched grade, a single grade line appears. If they receive different grades, two lines of text are used to describe each coin individually. These coins will receive the "First Day of Mintage" designation, which is also used by the U.S. Mint to describe these coins. The text on these covers reads, in part, "The George Washington $1 Coins showcased in this Official American Presidency $1 Coin Cover are coins struck on the first day of minting – November 9, 2006 (Philadelphia) and November 28, 2006 (Denver)." 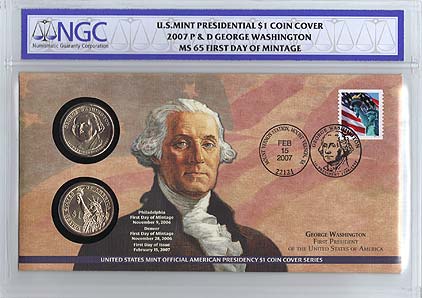 Because the coins are graded while still housed within the U.S. Mint Cover and will remain in this packaging, the NGC Coin Grading Guarantee does not apply. The NGC Guarantee applies only to coins in NGC holders. Like other NGC graded coins, the grades for these coins will be reported in the NGC Census, and they will be eligible for the NGC Registry.

NGC recommends that submitters send covers still shrink-wrapped and affixed to cardboard, as mailed by the U.S. Mint’s fulfillment center. This is not required, but coins in damaged or tampered covers will not be eligible for this service and cannot be designated as "First Day of Mintage." Only U.S. Mint covers are eligible for certification by NGC. Privately issued covers are not accepted. 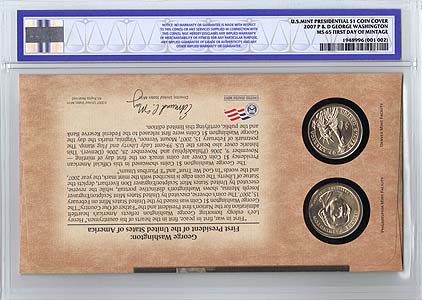 The reverse view of a 2007 George Washington Presidential $1 Coin Cover graded by NGC.
Both coins in this cover share the same grade. Click image to enlarge.

To submit coins for grading and encapsulation in the U.S. Mint cover, submitters should list the covers on a submission form. Covers should be submitted separately from other coin types being encapsulated in regular NGC holders. Coins in covers must be submitted under the Modern tier or higher. Select Special Label/Releases - Other and specify "First Day of Mintage" in the space provided. A grading fee applies to each coin in the cover. Minimum quantity submission rules still apply, and thus at least three sets of two coins are required when using Modern tier. Submitters with a single coin cover should use the Early Bird tier and select Special Label/Releases - Other and specify "First Day of Mintage." Note that only the encapsulated cover is returned, and no other packaging materials will be returned by NGC.

Submitters alternatively have the option of having coins removed from the U.S. Mint coin cover and placed in NGC’s EdgeView™ Holder with Presidential $1 Coin label. The designation "First Day of Mintage" will appear on the label. Submitters requesting this service should select the Modern tier or higher and select Special Label/Releases - Other and specify "First Day of Mintage. You must clearly write on the submission form the instruction: "REMOVE FROM COVER." The U.S. Mint packaging is not returned by instead is retained by NGC. Also note that the Modern tier minimum quantity requirements do apply and submitters of fewer than five coins must use the Early Bird tier and select Special Label/Releases - Other.

Questions regarding NGC Submission procedures should be directed to NGC Customer Service. They may be contacted by email at Service@NGCcoin.com or by phone at 1-800-NGC-COIN. 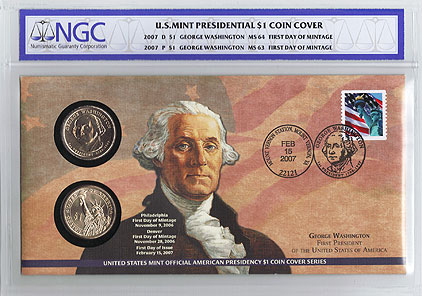 A 2007 George Washington Presidential $1 Coin Cover graded by NGC. The grades of both coins differs,
and each coin is described on its own grade line. Click image to enlarge. 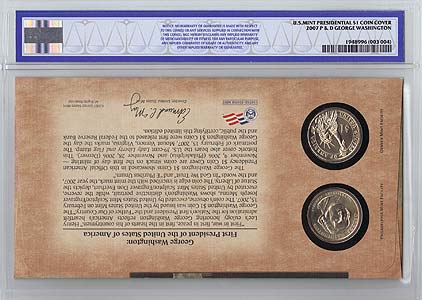 Reverse view of the above set.
Click image to enlarge.