At the XF level, the NGC US Coin Price Guide reports a value of $4,440, and prices climb quickly in AU grades. An AU 58 specimen trades for $16,880—nearly a fourfold increase above an XF example. Although this creates significant upside for a counterfeiter, fakes have been seen infrequently in the marketplace.

With the proliferation of new made fakes from China, however, spurious 1800 Draped Bust Dimes are now starting to be seen more often. A counterfeit recently identified by NGC is a typical example of one of these Chinese-made fakes.

Most notably, all of the design elements are poorly defined and the coin has an overall “fuzzy” appearance, particularly at the stars on the reverse. The denticles are nonexistent at the top of the obverse and are weak almost everywhere else. While Draped Bust Dimes are typically seen with soft strikes, this piece is particularly deficient and the inconsistent level of detail throughout is a red flag.

Looking closer, other issues common to counterfeits become obvious. There are a number of raised tines around the letters and numerals that are never seen on genuine examples. In addition, there are many raised lumps in and around the design elements that are a primary diagnostic for counterfeit coins. 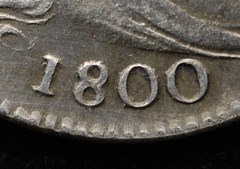 The combination of these problems allows an NGC grader to quickly condemn it as illegitimate. Since this coin’s appearance is similar to many of the Chinese counterfeits seen by NGC on a regular basis, it is important to be watchful for all of these diagnostics, regardless of a coin’s date or denomination.