When I started in rare coins over 35 years ago, there was only modest interest in later date 20th Century coins. Anyone who collected Jefferson Nickels, Mercury Dimes, Roosevelt Dimes and Franklin Half Dollars probably did so by filling a blue Whitman folder. Collectors of Standing Liberty Quarters were considered a bit more sophisticated, but not by much. At some point in the 1980s coin collectors started to pay much more attention to these series and pay significant premiums for fully struck Mint State coins. Strike is important, but what is most important is if a specific portion of the design is struck well enough to qualify as:

Collecting these coins has evolved to the point where they are considered two very different coins of the same date and mintmark. Most other coin series have certain years and mintmarks that are weakly struck and, therefore, sharp examples bring a premium. The 1926-D Buffalo Nickel is a good example. Coins that are nearly flawless are sometimes found with the horn missing on the buffalo. These are usually net graded and collectors of the series understand how to value them. The above series, however, are collected by the specific designation of strike for every date and mintmark. 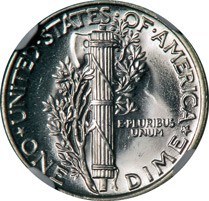 As is expected when attempting to locate a completely full struck example of any series, certain date and mintmark combinations are very elusive. My personal interest in Mercury Dimes was peaked decades ago when I came across a superb 1945 Mercury Dime. The coin is a blazing Gem and if turned in the light just right, there appear to be fully struck bands on the reverse. A Gem MS 66 1945 Mercury Dime with Full Bands is worth over $15,000. The same coin without full bands is worth around $35. Unfortunately, my coin has never met NGC’s strict standards for Full Bands. That is why the coin is still in my possession. Collectors of these series are only interested in coins that make the full designation. My 98.5 % Bands 1945 Mercury Dime is still only worth $35!

As can be seen from the above example, some coins that meet the necessary requirements to qualify as Full Steps, Full Bands, Full Torch, Full Head or Full Bell Lines are worth huge premiums. Each series has a few super stars that are extremely difficult to locate. I’ll examine each series and give details about a few of the more famous coins.

Jefferson Nickels. Interestingly, the rarest coins with Full Steps are later dates for the series. Early date Jefferson Nickels are very well struck in most cases. Starting around 1950, the quality of striking drops significantly.

Below are a few of the issues with the most dramatic price increases. There are a few Jefferson Nickels that are virtually unknown with full steps: 1960-D, 1961, 1962-D and 1963-D.

Note: NGC actually uses two designations for Full Step Jefferson Nickels: Five Full Steps and Six Full Steps. Although coins with Five Full Steps are considered “Full Steps,” those with Six Full Steps bring an even higher premium. There are many serious collectors of these Full Step coins, and if you are thinking about entering this area I suggest consulting an expert in the field for more guidance.

Mercury Dimes. Collectors have been paying a premium for fully struck examples of this series for many years. These are a few of the show stoppers that bring very large premiums when designated Full Bands.

Standing Liberty Quarters. This series is full of very rare and hard to locate issues, with or without Full Heads. These are just of a few of the coins that bring gigantic premiums for a coin that has been designated as Full Head.

Franklin Half Dollars. This set is easy to complete in Mint State condition. Coins that are fully struck with Full Bell lines are another story. Below are some of the highlights for the series:

As has been stated many times in this column, collectors seeking the finest coins for their Registry Sets will sometimes pay huge for coins that meet designation standards. It is an interesting segment of the market and one that has seen greater interest in recent years. For anyone more interested in collecting coins in this manner, I suggest attending a few large auctions so that you can see the difference in coins with or without these designations. Collecting rare coins can be relatively simple, but for some, these complicated and sometimes maddening issues are very exciting. Maybe you can find an original roll of Full Bell Line 1953-S Half Dollars and take that early retirement you have been dreaming of!