The price increase for a Mint State copper coin from an attractive shade of Brown to blazing Mint Red can be truly incredible. 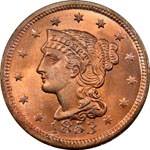 The above title is not the latest racy novel by E.L. James. The title refers to the incredible valuation increases collectors attribute to the colors assigned to copper coinage. Take for instance a few of the following examples from actual auction sales.

As can be seen from the above information, collectors highly value vintage copper coins with original Mint Red and are willing to pay for it. As can be expected, full Mint Red coins are increasingly difficult to find the earlier the issue. Many, if not most, dates of Large Cents are unknown in original, full Mint Red. Examples do show up on occasion and are bid to stratospheric prices by collectors. Early coins with ample, but not full Mint Red are also highly desired. Earlier this year a stunning 1796 Half Cent was discovered in England. The coin displayed beautiful glossy surfaces with original Mint Red color clearly evident. NGC certified the coin as MS 66 Red Brown. A nice circulated example of a 1796 Half Cent is cause for excitement; one can only imagine what this coin sold for!

Coins with Red or near-Red surfaces command large premiums and are highly desirable. The problem many collectors, dealers and grading services have is that color is sometimes hard to define in a narrow range of only three categories. Even coins that have been designated as Brown can have a hint of Mint Red color or other variations in shading. A perfectly uniform, Brown example is actually scarce and not the norm for most issues. The colors can also range from light brown to much darker hues. Some early issues can even appear more black than brown. 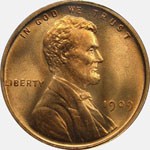 Now things get really tricky! There is no fixed rule about what constitutes a Red Brown or Red copper coin. As a general rule NGC states “RD coins exhibit about 85 to 90 percent of their original color, while RB coins display at least 15 to 20 percent red. Any coin with less red or non-red coloration will be designated BN.” The above can obviously be applied with a range of interpretations. The majority of coins designated as Red Brown have ample red coloration blending into brown. As can be seen from the above, valuations of Brown and Red Brown coins are much closer than those of Red Brown and Red coins. In most cases coins with the Red Brown designation trade in value based on the aesthetic appearance of the coins surface. This can lead to a wide range of auction prices seen for coins of the same grade.

Vintage copper coins struck before 1934 that have been designated as Red do not look like Lincoln Cents that have just left the Mint. There is a wide range of color variations that qualify as Red. These color hues can vary from shades of red-pink, red-yellow, red-orange and everything in between. Anyone who is serious about collecting early copper coins in full Mint Red should look at as many coins as possible to understand what to expect. This is especially important considering the large sums these coins command in the marketplace.

Besides color, collectors also need to consider surfaces on many issues. Several Lincoln Cent issues are known for coins seen with an almost wood grain appearance. Many of the classic 1909-S VDB cents are seen this way. Some collectors desire this look, others hate it. Another important consideration is carbon spots. Nearly every early Mint State copper coin with original Mint Red surfaces has at least some minor spotting. These can be microscopic to large and scattered across the entire surface. The interpretation of these spots actually weighs into how the coins grade. A Gem coin with nearly full Mint Red, but with a few light carbon spots, will sometimes grade MS 64 RD instead of MS 65 RD. Again, it’s a matter of interpretation on how various factors come into play when determining the final grade.

From reading the above, collectors might have concerns about buying copper coins at all. I have been asked many times over the years if it safe to purchase full Mint Red coins. Most are worried that the color over time will fade to a much less valuable Red Brown status. This concern is understandable, but my actual experience is that this is quite rare. NGC has been grading coins for over 25 years and I rarely see a coin that has been designated as Red that has faded to Red Brown. NGC also has the best guarantee for copper designations in the industry. Any copper, bronze or copper-nickel coin that they have graded has a ten year guarantee for the color designation from the date of encapsulation. My best advice is to closely examine any coin you are considering purchasing and decide for yourself if the color and price make sense to you. This area of the market has one of the widest ranges of appearance and valuation interpretations. As I have stated many times, education is your best protection!