The Southern gold coin series is filled with wonderful coins from a part of American history that many find fascinating.

I have been buying and selling coins for over 35 years. One of my early mentors was the late, great coin dealer, Jack Hancock. I first met Jack in the early 1970s on the southern coin show circuit. Jack was a wonderful character and one of the biggest advocates ever for collecting Southern gold coins. He specialized in Dahlonega gold coins, and had a lake house in Gainesville, Georgia, not too far from where these fascinating coins were minted. Over the years Jack and his partner, Bob Harwell, helped collectors put together many superb sets of Dahlonega gold coins. One customer decided to assemble the finest set ever and tasked Jack and Bob to hunt down and purchase the coins. The result of that effort was the Duke’s Creek Collection of Dahlonega, Bechtler and Templeton Reid gold coins—a complete set of the gold coins minted during and after the Georgia Gold Rush of 1828.

Sadly, Jack died of a heart attack around 15 years ago, well before the Duke’s Creek Collection came to market. I am not sure, but I believe one of the reasons the owner of the Duke's Creek Collection sold was that he truly missed the passion and dedication of his old friend, Jack. Bob Harwell and I sold the coins in 2004 in a transaction that topped $5 million dollars.

Over the years I have worked with many collectors interested in Southern gold coins. The series is filled with wonderful coins from a part of American history that many find fascinating. Surprisingly, collecting coins by mintmarks did not become popular in the United States until after the 1890s when Augustus Heaton published a numismatic work on the various mints. Early collectors of US coins were content with a proof example struck at the Philadelphia Mint. Little or no interest was paid to coins from the branch mints. The core collection in the Smithsonian that was transferred from the Mint in 1923 contained very few coins from the branch mints. Luckily for the Smithsonian, the addition of the Lilly Collection in the 1960s took care of this large gap, as he had assembled a nearly complete set of US gold coins. The Smithsonian collection has a complete set of Charlotte and Dahlonega gold coins with the exception of the very rare 1849-C Open Wreath Gold Dollar. Anyone interested in donating one is encouraged to give me call!

The Dahlonega Mint opened in 1838 to process locally mined gold. Output at this mint was always low, yet it continued to operate until 1861, when Confederate forces seized the building at the outset of the Civil War. Gold dollars were actually stuck while the Mint was under control of the Confederacy and are extremely popular for that reason. In 1878, the Dahlonega Mint was destroyed by fire. Today, Price Memorial Hall of North Georgia College sits on the original foundation of the Dahlonega Mint. The mintmark for Dahlonega is the letter “D” (the same as the Denver Mint, but the two mints never operated simultaneously). The Dahlonega Mint produced only gold coins many of which were poorly made. 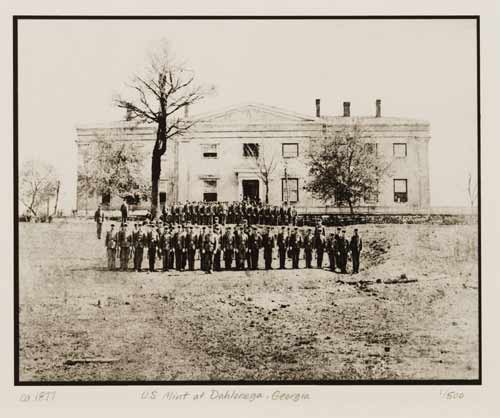 The Charlotte Mint opened in 1838 to process locally mined gold as well. In 1844, a substantial portion of this Mint burned to the ground, preventing coinage in 1845. In 1861, Confederate forces seized the Charlotte Mint and shut it down, turning it into a hospital and headquarters during the Civil War. From 1867 to 1913, the building housed a US Assay Office. The building was later moved and currently houses an art museum. Visitors today can also view a nearly complete collection of Charlotte gold coins in the basement of the museum and learn about its history of minting and assay work. The mintmark for Charlotte is the letter C. The Charlotte Mint produced only gold coins, usually with low mintages. The coins were not quite up to the production standards of the Philadelphia Mint, but generally better quality than the coins produced at its sister facility in Dahlonega, Georgia.

I am often asked for ideas on how to collect Charlotte and Dahlonega gold coins. Not many can attempt a complete set of either. A complete collection would cost well into the six figures for even a circulated set. Below are several suggestions on how to get started when collecting these interesting coins.

Purchase a few great coins
When I say great coins, this means the highest grade coins you can afford. For some this would mean an Almost Uncirculated coin, and for others this could be a couple of choice Mint State examples. I always suggest that collectors buy the best coins they can afford. I have purchased hundreds of collections over the years. One thing that always holds true is that the bargain hunters did much worse than those who bought quality coins. I have seen collections with coins that the collector decided to pay $1,000 for a problem coin to save money. The collector could have paid $2,000 at the time for a choice example. Today the $1,000 coin is worth $2,000 and the $2,000 is worth $25,000. The advice holds true for any series of United States coins: buy the best you can afford!

When buying a few great coins, you might also consider purchasing one of the “key” dates of the series. For gold dollars, this would mean an 1855-D or an 1861-D. Another great coin would be the 1854-D Three Dollar. The 1838-D Half Eagle is another favorite. One customer of mine only collects “key” date coins (of all denominations) on the theory that as demand rises for US coins, collectors will be forced to compete for the rarities. His strategy has proved very profitable over the years.

Assemble a type set of Southern gold
A basic type set of Southern gold coins would include one coin of each denomination from both the Dahlonega and Charlotte Mints. For Dahlonega, this would be composed of a gold dollar, quarter eagle, three dollar, and half eagle. For the Charlotte Mint a set would have a gold dollar, quarter eagle and a half eagle. An expanded set would include the different varieties of each denomination. This would include the following:

Collect by denomination
Over the years several collectors I have known have put together complete sets of a single denomination of Charlotte or Dahlonega gold. Many prefer half eagles because of their size.

Assemble a complete set of Dahlonega or Charlotte gold coins
There are 61 coins in a complete set of Dahlonega gold coins and luckily no real stoppers (coins over $100,000). With the exception of the 1861-D and the 1854-D Three Dollar, most of the other coins can be found in Extremely Fine or About Uncirculated condition. It will take patience and plenty of searching, but that is the fun of collecting.

A complete set of Charlotte gold coins consists of 54 coins, but many choose not to include the incredibly rare, 1849-C Open Wreath Gold Dollar. Even the Smithsonian collection is missing that one. The remainder of the set is doable with patience and diligence.

As has been mentioned earlier, many Southern gold coins were very poorly struck. Many were also struck on inferior planchets, with various defects being quite common. For high grade examples it is easy to confuse weak strike with wear. Sometimes you must concentrate on the surfaces and ignore the traditional high points. Today’s collectors have the luxury of third-party grading, but I still recommend that collectors learn the basics of grading Southern gold coins and work with an expert in this area. They will enjoy the experience more and have a better appreciation of these fascinating coins.

My last piece of advice is to find a rare coin dealer to help with your rare coin acquisitions. Having someone knowledgeable in the series and to help scour the country in search of the coins you are looking for will be invaluable. If you are lucky, you will find someone like Jack Hancock who will share his enthusiasm and passion!