2012 was an exciting year for Chinese Pandas. Here is a review of the medals and special issues.

From Shanghai to Singapore to Philadelphia, 2012 was an exciting year for Panda coin enthusiasts. As sales of Pandas within China picked up, there was a record-setting mintage of 8 million one ounce silver Mint State Pandas. The majority of these found homes within the People’s Republic of China as they were sold through commercial banks, as well as coin dealers.

The Chinese government has urged its citizens (including on T.V.) to buy silver. In the past that meant ingots, but the 2012 1 oz. silver Panda was promoted to the nation’s investors as an alternative. The coins are easy to find as most banks now offer a gold and silver Panda coin buying service to their customers. Many Chinese citizens have likely never owned a collectible coin before, so investing in Panda coins may open their eyes to numismatics as they discover that Panda designs change every year.

In addition to the 1 oz. silver Panda, 2012 provided another special treat. For the first time since 1997 the China Mint struck a coin show commemorative medal. Then for good measure they issued a second one! A quick bit of history: coin show medals are deeply rooted in Panda tradition. From 1984 through 1997 there were special coin show Panda medals issued each year. The coin shows took place everywhere including Hong Kong, China, Tokyo, US, Switzerland and Germany. The tradition ended with a trio of Munich Coin Fair medals in 1997 and most collectors thought that they were the last. So the announcement last year that the China Mint would release gold and silver medals for the Singapore International Coin Fair created quite a stir. 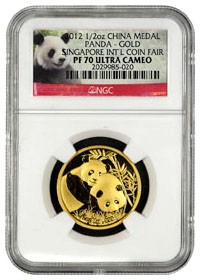 All the medals feature Pandas on one side and an image of the Great Wall, and Singapore’s amazing Marina Bay Sands Hotel on the other. The hotel has an enormous upper deck that spans its three towers. From a distance the deck resembles a ship cruising through the sky. Hotel guests can also cruise through the sky at an altitude of 620 feet in the deck’s not-to-be-forgotten “infinity” swimming pool. 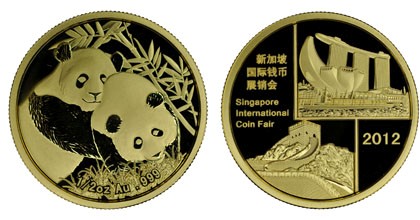 While collectors were wowed by the unexpected Singapore Panda medals the China Mint pulled another rabbit from its hat with news that it would issue medals for the August, 2012 ANA World’s Fair of Money in Philadelphia. Three sizes were struck: 1 oz. (mintage: 10,000) and 5 oz. (mintage: 2,500) silver, and 5 oz. (mintage: 99) gold. Long lines of buyers greeted these medals at the convention and the supply sent there soon ran out.

In recent years the China Mint has struck a series of special Panda coins that always seems to fly below the radar of most collectors. These are coins, not medals, and are issued to mark major Chinese financial and cultural events. 2012 added four members to this group. In April, a 1 oz. silver Panda, and a ¼ oz. gold Panda honored the 100th anniversary of the Bank of China. That was followed in October by 1 oz. silver and ¼ oz. gold Pandas for the 20th anniversary of Hua Xia Bank.

The mintages of these special issue Pandas are not large: just 10,000 of the Hua Xia gold coins and 50,000 of the silver, for example. Coins from this series have tended to be quietly bought up over time and some of the older issues like the CITIC Bank have appreciated significantly. They are very scarce in high grades, or even lower grades, for that matter.

Year 2012 added excitement and depth to the Panda lineup. 2013 has already started off with a bang with the announcement of medals for both the World Money Fair Berlin and the Long Beach Coin Expo. It should be another great year to collect Pandas!