A Swiss commemorative coin captures a folk legend, a structure and the devil all at once.

When it comes to coins, commemoratives are beyond abundant. It seems that countries all over the world are issuing coins to celebrate, remember, or promote a theme. Yet only one commemorative captures folk legend, a structure, and the devil all in one. In 1994, Switzerland released a coin commemorating the Devil’s Bridge Teufelsbrücke.

The Teufelsbrücke is the bridge over the Schöllenen Gorge in the Swiss canton of Uri. Throughout Europe there are several devil’s bridges with a different folktale associated to each one. Often the bridges were very complicated to build, so it was believed that the work could only be completed with the help of the devil. The folktale of Teufelsbrücke is that the original wooden bridge was so difficult and dangerous to build that the devil offered to build a new stone bridge in exchange for the soul of the first person to walk across it. When the bridge was completed, the villagers sent a goat across the bridge to trick the devil out of one of their souls. The devil was so angry by this that he picked up a large stone called Teufelsstein or the devils stone to destroy the bridge. On his way to the bridge the devil met a pious woman wearing a cross, which scared the devil causing it to drop the stone and flee. Teufelsstein today is still near Göschenen and weighs 220 tons.

The true story is that the bridge, which was needed as a pass over the Schöllenen Gorge, was built in 1230. Made of wood, the bridge often need repaired due to damage caused by the Swiss climate. Rebuilt in stone sometime in the 1500s, the bridge continued to earn its reputation when it was the scene of a battle during the Napoleonic Wars and sustained heavy damage. A new bridge built in 1820 took 10 years to complete, demonstrating the difficulty of the task. In 1888, the first bridge was destroyed in a storm. A new bridge, built in 1958, is used to accommodate the heavy traffic. While today Devils Bridge is believed to be only a fable, there are still believers of the tale. In 1977, Teufelsstein was moved to make way for a new motorway. Locals believe this action caused a rise in car accidents on the road because the devil’s rock was moved.

In 1994, the Swiss government issued a commemorative coin for the Teufelsbrücke. The obverse features a stylized scene by artist Peter Emch’s of his interpretation of the devil holding the Teufelsstein approaching the Teufelsbrücke. The reverse features the denomination of 20 Fr (Francs), Confoederatio Helvetica (Switzerland), and 1994 in a stylized cross. The Swiss Mint at Bern issued 184,868 uncirculated examples and 32,195 proof coins. 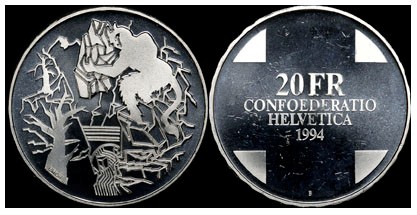 The coin may have been minted in 1994, but the story it represents dates back over 700 years. While commemoratives are issued worldwide for what seems like everything today, sometimes the story that a coin is trying to depict can be interesting if one takes the time to research it.