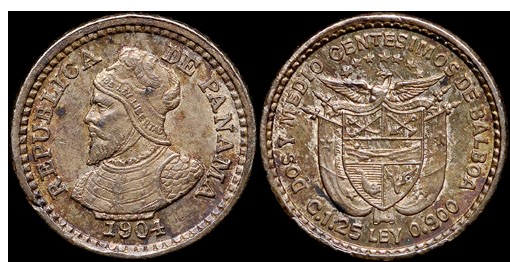 The roots of such a small coin date back to the Spanish American monetary system. Panama, situated next to Colombia, was using their currency as the means of exchange. The Colombian currency got its roots from the Spanish American Reales and Escudos. This system used throughout the Americas (including the US), was based on the 8 Reales coin that circulated as the equivalent to the dollar for some time. The 8 Reales would be broken down to 2 Reales and would circulate as a quarter or 2 bits. Based on this 1 bit or real would be the equivalent of 12-1/2 cents. Because of this old system, Panama coinage made in the United States needed to correspond to denominations used in trading, so 2-1/2 Centesimos were produced and, when paired with the 10 Centavos coin, equaled 12-1/2 Centesimos or 1 Real. This standard was also in place in neighboring Colombia.

In 1904, the US acquired the Panama Canal project from a failed French effort. As a result, the US produced coinage for use in Panama. The coinage of 1904 was silver and based on the Centimo which included 2-1/2, 5, 10, 25, and 50 Centesimos coins. The coins were produced using the US standard of .900 fine silver, and featured the portrait of Vasco Nunes de Balboa on the obverse and the Panamanian coat of arms on the reverse. The 2-1/2 Centesimos weighed in at 1.25 grams and measured a tiny 10 millimeters, making it the smallest coin produced by the US and the smallest government authorized coin in circulation in the Americas. Because of its tiny size, it was often comically referred to as a pill or Panama Pill. In 1907, the currency was revised and the 2-1/2 Centesimos were reintroduced in copper-nickel, with a diameter of 21 millimeters.

With a mintage of only 400,000 and a survival rate likely lessened by its small size, Panama pill is a very collectable coin today. The desirability stems from the small size of the piece as a curiosity. Between 1975 and 1985, 2-1/2 Centesimos (10 millimeter) coins were produced as part of collector sets to capitalize on the popularity of the original 1904 Panama Pill, which gives testament to the appeal of the original coin.