Bronze of Constantine the Great

During the 320s A.D., the Roman Empire was experiencing one of the great crisis points in its long and turbulent history. Civil wars raged from 306 until 324, when Constantine I “the Great” was finally able to secure exclusive power with his defeat of his last rival, Licinius I, in September of that year. Through this victory, Constantine established absolute rule, which had implications that extended far beyond the political realm.

Though Christianity was by no means the official state religion at the time of Constantine’s defeat of Licinius, it had been gradually gaining influence throughout the empire for three centuries. Indeed, there were several notable persecutions of Christians in the preceding centuries, carried out by emperors who, for political or personal reasons, targeted this religion.

Bearing this in mind, Licinius was a supporter of the old pagan religion; at least in the surviving sources — all pro-Constantinian by virtue of his victory — was avowedly anti-Christian in his views and actions. His defeat and execution cleared the way for Constantine, who had adopted Christianity and was the first emperor to be baptized. He made great strides to galvanize Christianity, leading to its eventual selection as the official religion of the Roman Empire.

While most bronze AE3s of Constantine I typically sell for less than $100 (even in AU condition), the example here is worth many thousands of dollars because the design depicted on the reverse relates to the rising prominence of Christianity. Struck c.327-328 at the Constantinople mint, NGC Ancients assigned it the lofty grade AU* (Strike 5/5, Surface 4/5).

This is a most unusual Constantinian bronze as its reverse bears a Roman military standard with three pellets on its flag, topped with a Christogram, the first official symbol of Christianity. The Christogram is comprised of the Greek letters Chi and Rho, representing the first two letters of Christ. This particular form of military standard, charged with its religious symbolism, is called a labarum.

Significantly, the labarum is piercing the serpent below, heavy-handed symbolism that has been interpreted in various ways by numismatists and historians. It might refer merely to the defeat of Licinius himself (seemingly represented by the serpent) or, perhaps more likely, it relates to the triumph of Christianity over paganism. From this point forward, monotheism was fast becoming the order of the day.

Regardless of the exact meaning, which may never be known, this coin type speaks directly to an important moment in the history of the Roman Empire and Western civilization as a whole. This item is an important relic for both numismatists and scholars of ancient history and religion – everything one could hope for in a coin, be it ancient or modern. 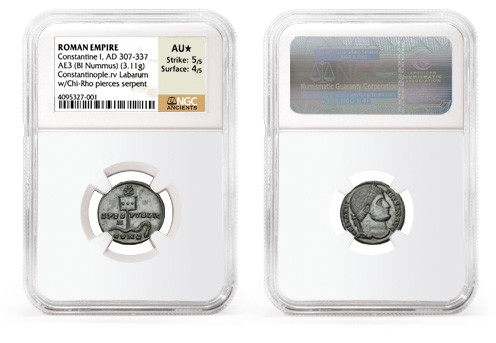 From the Grading Room is an occasional feature of the NGC E-mail Newsletter in which we highlight some of the more unusual or seldom seen items submitted for certification. Click to explore other special finds.