Collectors have the option not to buy cleaned or ugly coins. But as a dealer, you may not have that option when purchasing a large collection. When the time comes to disperse the collection, the authenticity of these harshly cleaned or ugly coins becomes important. Within the last decade, counterfeiters have targeted relatively common Type coins that take on value as they approach the higher grades. In the past, many of these coins would not have rated much scrutiny but excellent copies of Braided Hair cents and silver Trimes have been reported. Now we can add a Liberty Seated half to our mix. 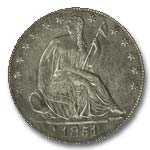 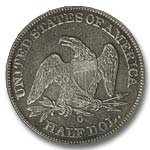 In the past, most of the deceptive Seated Liberty fakes have been alterations. Recently we received a struck counterfeit 1851-O half dollar. The coin had an unusual dull gray surface, commonly found on moderately etched or over-dipped silver coins. Under magnification, the letters of the legend were minutely thicker, and slightly more rounded than found on the genuine specimens. Although the coin looked suspicious, no one defect conclusively condemned it as a counterfeit.

The key to this coin’s authenticity turned out to be it’s edge. Genuine 1851-O coins were struck in a collar with 141 edge grooves. The counterfeit coin had too many of these edge grooves. I expect that the next time we see one of these Seated Liberty half fakes, it will have the correct reed count!