The first coin was a New Jersey quarter. The second image was located on the obverse of the coin, showing details of the reverse. 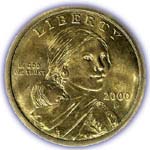 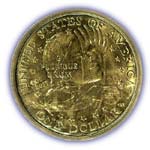 The reverse of the coin suspiciously did not show any underlying details of the first strike. Closer examination revealed that the coin was a normally minted New Jersey quarter subsequently re-struck on the obverse with a fake reverse die. The counterfeit reverse die that was used looks fairly good to the naked eye, but under a glass it is easily identified as a fake. There is also inconsistency in the way the strikes overlap between the fields and the relief.

The second coin was a Sacagawea dollar, also struck a second time on one side with a counterfeit die. In this case, the reverse of the coin was re-struck with a false reverse die. Again, close examination would reveal that the fake reverse die had many flaws (pits and bubbles to name just two). 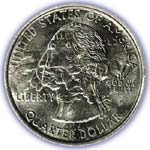 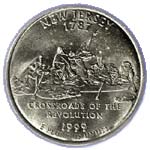 Because real in-collar double-struck statehood quarters and Sacagawea dollars are very valuable, it is likely that more of these fakes will surface and be offered for sale. Highly deceptive fake errors such as these make a strong case for having your error coins certified and authenticated by NGC.