Each of the 91 coins are encapsulated with the pedigree Ted Williams Collection. 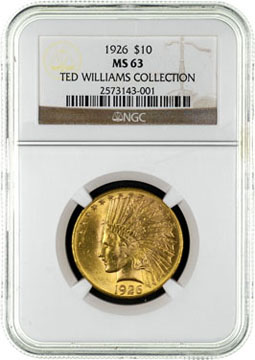 [Sarasota, Florida] – Numismatic Guaranty Corporation (NGC) has announced that they have certified select coins from the Ted Williams Collection.

The 91 coins were a part of the personal items of Baseball Hall of Fame member Ted Williams. Each coin is encapsulated with the pedigree
Ted Williams Collection.

“We are pleased to grade this collection of coins from one of the legends of baseball,” said NGC CEO Steve Eichenbaum.

Williams, regarded as the greatest batsman in Major League history, spent his 22 year career with the Boston Red Sox. His many records and accomplishments include 6 AL Batting Championships, .344 Career Batting Average and a .406 batting average in 1941. He was also awarded Most Valuable Player for 1946 and 1949 and Player of the Decade from 1951-1960. 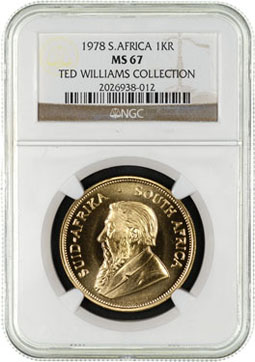 “NGC has done an exemplary job in grading the coins from the Ted Williams Collection,” remarked David Hunt, President, Hunt Auctions. “We felt it important to memorialize the provenance of this particular grouping of coins as having originated from one of the great sports collections to have ever come to market.”

The coins are a part of a large quantity of Ted Williams’ personal items that will be offered to the public by Hunt Auctions at a live event on April 28, 2012 at Fenway Park in Boston, Massachusetts. A portion of the proceeds from the sale of the auction will be donated to The Jimmy Fund, a prestigious Boston charity which is forever affiliated with Ted Williams, Dana-Farber Cancer Institute, and the Boston Red Sox. For more information about the coin collection or the auction events in general please visit www.huntauctions.com