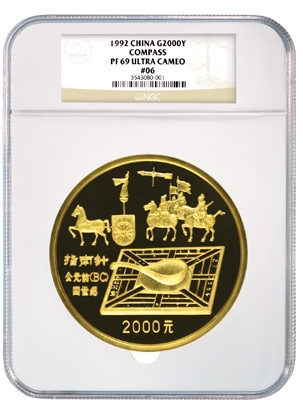 The 2000 Yuan coin is part of
a series celebrating Chinese inventions and discoveries. The obverse features a depiction of a compass and
the Great Wall of China is on the reverse. Produced by the Shenyang Mint, this extreme rarity is numbered 06 from a maximum of 10 pieces struck. According to Michael Chou, CEO of iAsure, it may be the rarest of all authorized coinage of China.

According to Chou, the previous record holder for a 1 kilogram coin, a 1994 Year of the Unicorn, realized approximately US $602,326 in Champion’s June auction.

The 186-lot August auction, Champion’s second focused on modern Chinese material, realized US $5,170,382. The high-visibility rarities in the Champion Hong Kong Auction’s sale drew a lot of wealthy bidders to the auction.