The Australian Mint came up with a clever way to make a cache of 1964 pennies valuable and collectible.

Normally, the idea of a coin hoard excites numismatists everywhere. But what happens when a hoard of coins is found that has very little collector or intrinsic value? If you are the Royal Australian Mint, you turn lemons into lemonade. This is just what happened with the Australia 2004 Silver $1 Proof 1964 Penny. 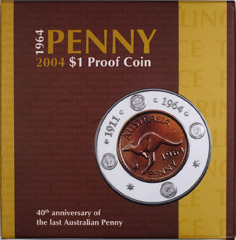 The Australian penny was first struck for circulation in 1911 by the Commonwealth of Australia. Before 1911 the vast majority of circulating copper coinage in Australia consisted of tokens and other foreign coinage. In 1964 the last penny was produced because Australia switched to the decimal coinage system. In 1966 the half penny and penny were replaced by a cent. When the cent was introduced, the value of a penny was equal to 83.333 cents; therefore, the penny was quickly withdrawn from circulation.

The 1964 Australian penny had a mintage of 103,720,000 at both mints and does not have any great value today unless in high grade pristine red condition. When a hoard of over 16,000 pieces was found, it was nothing to get excited about. With such a large cache of coins of very little collector and metallic value, the Australian Mint came up with a clever way to make the coins valuable and collectible. They made new coins out of them — the 2004 Australia $1 Proof coin commemorating the 40th Anniversary of the minting of the last Australian Penny.

Each penny was coated with lacquer and encased in a one ounce silver ring similar to encased coin tokens. The ring was struck in proof, denominated as one dollar legal tender and dated 2004. Issued under Australia’s 2004 subscription program, the total mintage was limited to demand. This coin had a mintage cap of 16,437, presumably the size of the hoard of 1964 pennies.

At the time of release the average uncirculated 1964 Australian penny retailed for around a dollar or two with little collector or dealer demand. The Australian Mint used the demonetized pieces it had in storage to create a first-of-its-kind official government encased commemorative coin. The new coin with its limited mintage, silver content and commemorative status found a collector market instantly and made the 1964 pennies desirable. Instead of melting or selling the pennies at an inflated rate the Mint found a unique solution.

The remaining question is what will happen to other such hoards that are discovered? Will they be melted, sold to collectors and dealers as is, or turned into a new collector coin?