[Sarasota, Florida] – The U. S. Mint’s recent announcement that its production of Uncirculated Silver American Eagle bullion coins will be supplemented with coins minted at San Francisco came as a delightful surprise to collectors. Though these SAE coins will not carry the ‘S’ mintmark of San Francisco, they will be shipped in bulk packaging that identifies their place of manufacture, and NGC will certify these coins as products of the San Francisco Mint.

The number of SAE coins that San Francisco will mint is unknown, but collectors will certainly seek these pieces as issues separate from the normal production of the West Point Bullion Depository in New York. Numismatic Guaranty Corporation (NGC), will label these coins with the ‘S’ mintmark in parentheses to indicate that it is not actually present on the coin. In addition, each label will read “Struck at San Francisco Mint.”

The Silver American Eagle bullion coin debuted in 1986 as a means for Americans to purchase and hold domestically-mined silver bullion in a convenient and attractive form. Boosting the coins’ appeal has been its popular design, which features on its obverse the beautiful Walking Liberty from Adolph Weinman’s 1916-47 half dollar. This is paired with a splendid heraldic eagle reverse sculpted by U. S. Mint Chief Sculptor-Engraver John Mercanti.

Both Uncirculated and Proof editions have been offered since the outset, and these have been coined at several of the U. S. Mints. By the 1990s, however, minting of the Uncirculated edition had been confined almost exclusively to the West Point Bullion Depository, with no means to distinguish these from the coins made at other mints. The ‘W’ mintmark has been used in recent years for selected collector editions, but this is the first time that ordinary Uncirculated Silver American Eagles will be identified as products of the San Francisco Mint. 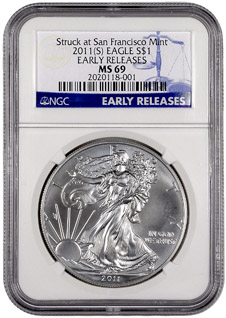 Because the S-Mint Silver American Eagles will be distinguishable only by the fact that they are shipped by the Treasury in large “monster boxes” labeled San Francisco Mint, NGC’s labeling of these coins as San Francisco products will be limited to bulk submissions in such original shipping containers still sealed. Dealers may contact NGC for further instructions about this service. Coins submitted during the first 30 days of issue are eligible for labels additionally reading EARLY RELEASES.

Questions regarding submission procedures can be directed to NGC Customer Service using the online contact form or by calling 1-800-NGC-COIN (642-2646).