One of the most extensively counterfeited United States issues is the Trade Dollar. Recently, one was submitted to NGC that exhibited a number of the telltale signs of a fake. 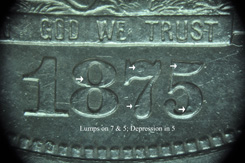 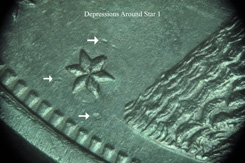 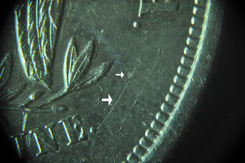 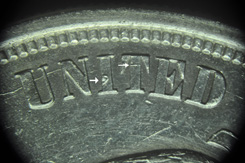 A cursory look at this 1875–S Trade Dollar reveals sharply defined design elements and decent luster–nothing to indicate that it is a counterfeit. However, a closer inspection, particularly under a loupe, reveals several unusual qualities. The digits 7 and 5 in the date have prominent lumps and depressions. A raised line bisects the top half of the 8. To the left of the date, at star one, are a number of depressions–these are caused by abrasions on a genuine coin being transferred onto dies and struck on the counterfeits.

On the reverse are a number of raised lines; the most noteworthy starts at the period after FINE and ends near the last A in AMERICA. A small, granular depression is seen to the right of the olive branch. An incuse line through the T in UNITED, as well as a large raised lump on the I, also stand out.

This counterfeit was struck from dies made by transferring details from a genuine specimen. By making a copy from a genuine coin, the counterfeiter is assured that the letters and design elements are properly shaped and spaced. Nonetheless, this process leaves depressions, lumps, and raised lines that help to identify the coin as a fake. Collectors should be suspicious of any coins that display these or similar characteristics.