100 Greatest U.S. Modern Coins, by Scott Schechter and Jeff Garrett, takes the reader on a guided tour of circulating, bullion and commemorative issues. 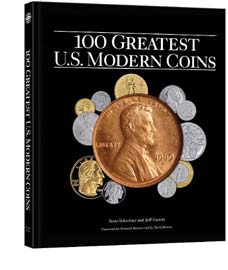 [Atlanta, Georgia] — Whitman Publishing announces the release of 100 Greatest U.S. Modern Coins, by Scott Schechter and Jeff Garrett. In this beautifully illustrated book, two celebrated numismatists take the reader on a guided tour of the circulating, bullion, and commemorative issues so avidly sought by collectors today. The book will be available February 21, 2011, online (including at WhitmanBooks.com) and from booksellers and hobby shops nationwide.

“The 100 Greatest were selected and ranked by the authors with input from leading coin dealers, researchers, and collectors, and a survey of current journals and periodicals,” said Whitman publisher Dennis Tucker.

•  NGC Offers New Label For Greatest Modern Coins
Inside the reader will find prized and seldom-seen rarities—the scarce and high-valued pieces that collectors dream about. Some are die varieties, like the 1969-S doubled-die obverse Lincoln cent and various “No S” Proof coins. Some are errors, like the famous 2000 Sacagawea dollar / Washington quarter mule. A few are coins that shouldn’t exist, like the 1974 aluminum Lincoln cent and the mysterious 1964 Special Mint Set coinage. And many are coins with small mintages or poor distribution, or that saw low initial interest from collectors — factors that make them scarce and popular today.

The book also explores more readily available coins: pieces so beautiful or with such important and fascinating stories that everybody wants one. The 1999-S silver Proof Delaware quarter, the 1996-W Roosevelt dime, the 1983-P Washington quarter, the 1982 Washington commemorative half dollar, and dozens more are pictured in bold full color, with their stories told in engaging detail.

The book includes forewords by numismatic legends Kenneth Bressett and Q. David Bowers. An illustrated introduction answers the question, “What are modern coins?” (As a starting point, Schechter and Garrett discuss 1964 as a pivotal year for modern coinage.) The introduction also covers methods of modern coin manufacture and packaging; the differences between varieties and errors; how modern coins are graded; and how the 100 Greatest were chosen and ranked.

Throughout the book, Schechter and Garrett describe how to collect and enjoy U.S. modern coins, aspects of the marketplace, and smart buying.

Ken Bressett, longtime editor of the best-selling Guide Book of United States Coins, calls the book “compelling.” In his foreword he wrote, “You will be not only fascinated by the coins, but also thrilled to know that some can actually be found in your pocket change. They disprove the axiom that all the good coins are gone from circulation.”

Q. David Bowers, the “Dean of American Numismatics,” in his foreword wrote about the hobby’s growing passion for die varieties, the rebirth of the U.S. commemorative coin program, and other aspects of modern collecting. “I enjoyed reading about my own favorite coins,” he said, “but also came to appreciate many I had overlooked.”

100 Greatest U.S. Modern Coins will be available February 21, 2011, online and from hobby shops an bookstores nationwide.

The thoughts and opinions in the piece are those of their author and are not necessarily the thoughts of the Certified Collectibles Group.