This 1875 nickel instantly stood out due to its numerous planchet flaws.

Last month we featured a Chinese-made counterfeit 1914-D Buffalo nickel, a relatively low value coin that we were surprised to see faked. Shortly after that article was published we received another unusual counterfeit five cent piece: an 1875 Shield nickel. However, while the 1914-D is a modern fake of Chinese origin, we suspect that this piece is a contemporary counterfeit—a coin struck to fool the general public, not collectors.

Like the 1914-D, this coin is not a particularly deceptive counterfeit, but it is dangerous because it can easily go unnoticed. The 1875 is an average date in the Shield nickel series and even Gem examples can be located without much difficulty. This fake, however, was not intended for numismatists and was likely made in the 1870s or 1880s for circulation. The cost to produce a five cent piece was a mere fraction of its stated value and a counterfeiter could pocket the difference. By faking nickels and not silver and gold coins, the counterfeiter might also be able to strike significant quantities while escaping detection. 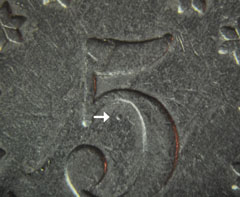 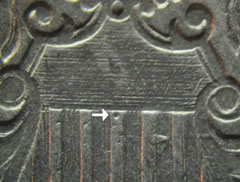 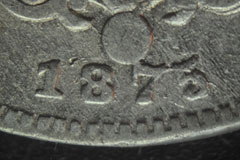 The date is notably malformed.

This 1875 nickel instantly stood out due to its numerous planchet flaws, which are indicative of an improper alloy, and the crude appearance of the letters. A metallurgic analysis (an added service offered to all NGC submitters) revealed that the composition was 74% copper, 20% nickel, and 5% zinc, a significant deviation from the proper alloy of 75% copper and 25% nickel. The weight was also slightly low at 4.5 grams (it should weigh 5 grams). The dies appear to have been at least partially engraved by hand. There is a prominent center dot on both sides, which is highly unusual for this issue, and many of the letters, as well as the digits in the date, are notably misshapen.

Upon inspection, this fake actually appears quite crude. The rim is too wide and appears split in several areas. The design is weakly struck and incomplete in the periphery, especially at LIBERTY. The mintmark bleeds into the field around it. Overall, the surfaces have an unusual appearance that makes this coin stand out from genuine examples.

Counterfeits have been around since the earliest coins were struck and some contemporary fakes have even become quite collectible. However, some of these counterfeits have found their way into collections, mistakenly thought to be genuine examples. This counterfeit was not made to dupe numismatists, but it has the potential to be overlooked as a common date. A careful inspection of any coin is always recommended.