Ancients: Coins of the Roman Republic

Roman Republican coinage is diverse and interesting, and traces the transformation of Rome from a vulnerable city to the ruler of the Mediterranean world.

The Roman Republic is one of the most avidly collected areas of ancient coinage. Its coins bear attractive designs that often reflect events of the day or celebrate exploits of the past. After getting off to a slow start in the late fourth and early third centuries B.C., coinage became important to the Romans, who issued them for about a millennium in the Republic and the Empire.

Up until the late third century B.C., the traditional metal of exchange in Central Italy was copper, which had been produced as "money" since at least the sixth century B.C. in the form of irregular cast lumps of copper now called aes rude. These objects did not meet the strict definition of coinage, but by about 300 B.C., bronze was being cast in ingots with designs. Eventually it became standard that Roman coins were struck rather than cast.

Republican coinage is both diverse and interesting, and traces the transformation of Rome from a vulnerable city to ruler of the Mediterranean world. Since a single column can only cover the basics, we’ve selected 10 topics that introduce the major denominations and reflect the development of Republican coinage.

1. Copper Coinage Copper was the basis of the original Roman monetary system, and all silver and gold coins were valued in terms of the main copper unit, called an "as." For most of the third century B.C., the Romans cast their copper coins, but they sometimes struck them simultaneously, a practice that was regularized early in the Second Punic War (c.218-201 B.C.). From 211 B.C. onward, all Republican coins were struck. Because there were many different copper coins, the Romans used pellets, numerals and different designs to distinguish the denominations. Many Republican bronzes are rare, and there is a wide variety of types and issuers. Shown here is the most familiar Republican bronze: an as struck after 211 B.C. with the bearded head of Janus and the prow of a war galley, above which is an "I" to mark its value.

2. Gold Coinage Gold did not become a regular part of the Roman monetary system until the age of Rome’s first emperor, Augustus (27 B.C.-A.D. 14). Rome’s first gold coins were staters and half-staters of c.218-216 B.C., issued soon after Hannibal crossed the Alps at the start of the Second Punic War. The next series was issued near the end of that war, c. 211-208 B.C., and consisted of coins valued at 60, 40 and 20 copper asses. There was no need to strike gold again until the late 80s B.C., when the general Sulla introduced the aureus, a coin valued at 25 silver denarii. Other aurei followed, being struck by Pompey, Julius Caesar, Marc Antony, Octavian and other generals. Sulla’s aurei were struck at 30 to the Roman pound, but by about 46 B.C. they were being struck at 40 to the pound, a standard that persisted for the next 110 years. Illustrated here is a 60-as of c.211-208 B.C. that portrays the god Mars and the eagle of Jupiter.

3. Silver Didrachm The first struck "Roman" coins appear to have been produced in Neapolis (Naples), a Greek ally of Rome during the Second Samnite War (c.326-304 B.C.). Over the next century, the Romans issued several types of silver didrachms with new designs – usually the head of Mars or Apollo paired with a horse or horse head. Most of the later pieces were struck in Rome, and it seems that each was prompted by a special circumstance rather than any need for a steady supply of silver coinage. The purpose of each issue is still debated, and it is unlikely that a precise dating will be established. Illustrated here is a didrachm struck sometime between 275 and 255 B.C.; it shows a youthful head of Hercules and the she-wolf suckling Romulus and Remus, the mythological brothers credited with founding Rome in 753 B.C.

4. Silver Quadrigatus Roman coinage was fortified during the Second Punic War. In addition to gold coins, the Romans issued copper and silver coins, sometimes in enormous quantities. The principal silver coin of the war was a reduced-weight didrachm called a "quadrigatus" after its reverse design, a four-horse chariot (quadriga) bearing Victory and Jupiter. There are many varieties of quadrigati, as revealed by differences in die engraving, metal purity and production standards, not to mention subtle variations of the main design. This suggests that several mints issued quadrigati at different times, and under quite different circumstances. The double-head on the obverse usually is described as the god Janus because of its distinctive form, but the faces are of young men, and it more likely represents the Dioscuri, the gods Castor and Pollux, who were credited with saving Rome at the Battle of Lake Regillus nearly three centuries before.

5. Silver Denarius – Roma and Dioscuri Type In about 212 or 211 B.C., in the midst of the Second Punic War, the Romans radically changed their monetary system, replacing the quadrigatus with the denarius, a silver coin destined to be the cornerstone of the Roman monetary system for the next 450 years. At about two-thirds the weight of the quadrigatus, the earliest denarii show the helmeted head of Roma and the Dioscuri (Castor and Pollux) riding on horseback with lances at the ready. This iconic design remained the standard until about 190 B.C., after which it was still used with regularity until about 121 B.C. Initially, denarii were inscribed only with the name ROMA, but in later years they included the name of a mint official (moneyer), as on this example struck by Q. Marcius Libo in about 148 B.C. 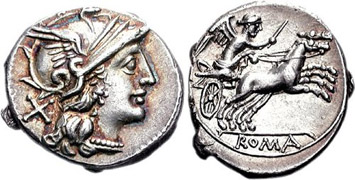 6. Silver Denarius – Roma and Chariot Type Another iconic design on Republican denarii pairs the helmeted head of Roma with a variety of chariot scenes. The earliest examples, dating perhaps from c.194 B.C., show Luna (Diana) driving a two-horse chariot (a biga). For the next few decades, Luna remained a standard choice, but other deities were introduced as driver, including Victory, Jupiter, Apollo, Sol, Venus, Mars and Libertas. Sometimes the horses that pulled the chariot were replaced with other animals (or creatures), including stags, goats, centaurs and elephants. By about 100 B.C. the head of Roma was phased out of chariot-reverse denarii, though the type was used until the final issues of the Republic. The issue shown here is believed to have been struck in 157 or 156 B.C.; since no moneyer’s name appears, it is considered an "anonymous" type.

7. Silver Fractions Alongside the denarius, three fractional silver coins were introduced: the victoriatus (a debased silver coin used mainly in Greek and Celtic regions), the quinarius (a half-denarius) and the sestertius (a quarter-denarius). The sestertius did not long survive, and is best known for its later incarnation as a large, base metal coin of the Roman Empire. All three of these coins were subordinate to the denarius in value and function. Though production of the first group of quinarii and sestertii ceased by about 207 B.C., the victoriatus seems to have been issued with some regularity until about 170 B.C. By about 100 B.C. the quinarius was revived, presumably to replace worn victoriati that remained in circulation. After the fall of the Republic, quinarii were struck for the next four centuries, though mainly as a ceremonial coin. Shown here is a quinarius of the moneyer M. Cato, struck in about 89 B.C., which shows the god Liber (Bacchus) and the seated figure of Victory.

8. Silver Denarius – Moneyer Type Designs and inscriptions on early Republican coins were devoted solely to Rome. The identities of moneyers (the officials responsible for issuing coins) began to appear on coins late in the Second Punic War, very likely as a bureaucratic innovation. However, as the cult of personality gained momentum in the Republic, the signatures of moneyers expanded from single letters, monograms or symbols to more complete versions. Eventually, moneyers began to use personal designs that celebrated accomplishments of the moneyer’s family. Though the office of moneyer seems to have been minor, one can imagine how an aspiring young nobleman would see it as a way to promote himself early in his career. The reverse of this silver denarius of M. Nonius Sufenas, struck in about 57 B.C., records how one of his ancestors founded games celebrating Sulla’s victory at the Colline Gate in 82 B.C.

9. Silver Denarius Serratus An enduring mystery of Republican coinage is the silver denarius serratus, which is distinguished from regular denarii by a series of deep vertical cuts along its edge. More than 20 issuers struck serrati starting in about 209 B.C., with the vast majority being produced between about 82 and 59 B.C. Some denarii were struck using both regular and serratus blanks, but these are notable exceptions. It has been suggested that the cuts were applied to identify a different mint, to denote a special function, to define an area of circulation, as a counterfeit deterrent or as a decorative feature, but there is no consensus. Shown here is a serratus of 71 or 65 B.C. on which a moneyer honors his grandfather Mn. Aquillius, the Roman consul of 101 B.C., who suppressed a slave revolt in Sicily. It shows the head of Virtus ("manliness") and a scene in which the consul lifts the weary figure of Sicily. 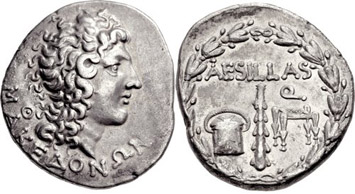 10. Provincial Coinage As Rome's authority gradually expanded from central Italy to the far shores of the Mediterranean, so did its oversight of coinage throughout the Greco-Roman world. During the Republican age, Romans allowed local coinages to remain largely unchanged, so long as their issuance did not conflict with Rome's interests. Many coinages were struck in regions under Roman rule during the Republic, with particularly large issues in Macedon, Asia Minor and Syria. A perfect example is this silver tetradrachm struck in Macedon between c.95 and 70 B.C., long after that nation had become a Roman province. The obverse is devoted to Macedon, showing the head of its greatest king, Alexander the Great, and its Greek inscription that identifies the coin as Macedonian. The reverse, however, is devoted to Rome: the club of Hercules (Heracles) is flanked by a money chest and the chair of a Roman quaestor, here identified as Aesillas with a Latin inscription.