David Vagi continues his discussion of some of the most important issuers of Roman coins in the last of a multi-part series.

1. Marc Antony, Imperator, d. 30 B.C. During the imperatorial period, when the Republic came to be replaced by a monarchy, Marc Antony was a powerful figure who ultimately failed due to his shortcomings. He was schooled in politics and war by Julius Caesar, and would have been his successor had Caesar not adopted his great-nephew Octavian. Instead, Antony found competition in Caesar’s young but resourceful heir. Over the course of 13 years the two men joined forces and clashed on many occasions, eventually dividing the Mediterranean world between themselves, with Antony in the Greek East and Octavian in the Latin West. Antony married five women, including Octavian’s sister, whom he abandoned to marry Cleopatra VII, the queen of Egypt. After losing a pitched battle against Octavian in 31 B.C., Antony’s options expired and he committed suicide. This silver denarius of 42 B.C. shows Antony wearing a beard, a sign of mourning for the murdered Julius Caesar. 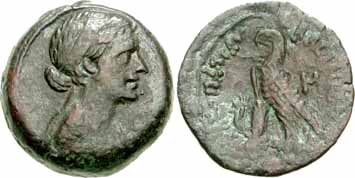 2. Cleopatra VII, Queen of Egypt, 51-30 B.C. Without question the most famous woman of antiquity, Cleopatra VII was the last Greek queen of Egypt. She was remarkably intelligent, speaking as many as nine languages, and showing much skill as a politician; it would seem she lost her throne due to inferior resources rather than a lack of talent. In an effort to save her kingdom, Cleopatra allied herself first with Julius Caesar and then with Marc Antony, but this incensed those who feared Rome might become a subject of Egypt rather than the other way around. In 37 B.C. Cleopatra married Marc Antony, and together they failed to defeat Octavian and Agrippa at the Battle of Actium in 31 B.C., after which both sailed from Greece to Egypt. They ended their lives by suicide, with Cleopatra holding out until the last moment. Cleopatra issued many coins, including this bronze of Alexandria with her distinctive portrait. Many of her later coins qualify as “Roman” based on their context, denomination, style and fabric.

3. Domitian, emperor A.D. 81-96. After three decades living in the shadow of his illustrious father and brother, Domitian was able to guide his own destiny when late in A.D. 81 he succeeded his brother Titus as emperor. He won the loyalty of the army by personally leading campaigns in Germany and by improving pay and conditions of military service. By contrast, his life in the palace was sordid and scandalous, and his relationship with the senate was dreadful. To the nobility in Rome it hardly could have been a surprise when Domitian was assassinated in September of 96, bringing an end to the Flavian Dynasty. The senate replaced Domitian with an elderly lawyer and senator named Nerva, which only amplified the rivalry between soldiers and politicians, causing Nerva to adopt the general Trajan as his son and heir. A mature portrait of Domitian appears on this silver cistophorus struck for use in the Roman provinces of Asia Minor.

4. Didius Julianus, emperor A.D. 193. The most shameful event in Imperial history occurred on March 28, A.D. 193, when the right to be emperor was sold at auction by the praetorian guards. The high bidder was a wealthy nobleman, Didius Julianus, who the senate was forced to hail emperor. Outraged citizens quickly appealed to generals in the provinces for help. The closest and first to respond was Septimius Severus, who marched on Rome, executed Didius Julianus and replaced the praetorian guards with men of his own choosing. The sale of the throne launched a two-year civil war because generals in Gaul and Syria also responded to the citizens’ pleas, and they were hailed emperor by their legions. The bearded portrait of Didius Julianus appears on this bronze sestertius. We are told he promised to pay the equivalent of 25,000 sestertii to every praetorian guard, and no doubt much more to officers.

5. Gordian III, emperor A.D. 238-244. A "child-emperor" of the 3rd century A.D., Gordian came to power during the civil war of A.D. 238, which began with a revolt led in North Africa by his grandfather and uncle. Six emperors reigned in four riotous months that followed, the last being 13-year-old Gordian III. From the outset Gordian reigned from a position of weakness and was surrounded by ambitious men. He sought protection by marrying the daughter of his praetorian prefect Timesitheus, and though this extended his reign, ultimately it did not save him. In 241 he led an army to the East because Roman Syria had been overrun by the Sasanians. The campaign was stopped mid-stride when, in turn, Timesitheus and Gordian died mysteriously, leaving the commander Philip I “the Arab” – seemingly their murderer – as the next emperor. This bronze sestertius bears a typically youthful portrait of Gordian III.

6. Valens, Eastern Roman emperor A.D. 364-378. Soon after the Constantinian dynasty ended the brothers Valens and Valentinian I assumed office as co-emperors, with Valens ruling in the East and his brother in the West. After many campaigns against foreign and domestic enemies, Valens’ fate was sealed with the arrival of the Huns, who forced the Goths to cross the Danube into Roman territory. Valens allowed them to settle, but as more "barbarians" crossed the Danube and confederated, Valens had no choice but to lead an army against them. Since he advanced before a Roman army from the West could arrive to help him, it is uncertain if Valens acted out of necessity or wanted to take sole credit for what he may have believed would be a glorious victory. In one of the great tragedies of Roman history, Valens and perhaps two-thirds of the army of the Eastern Roman Empire perished near Adrianople in a pitched battle on August 9, 378. A portrait of Valens graces this gold solidus from the Constantinople mint, which also shows the emperor on the reverse being crowned by Victory.

7. Leo I “the Great,” Eastern Roman emperor A.D. 457-474. Rising from humble, provincial origins, Leo was hailed emperor in A.D. 457 by the barbarian Master of Soldiers, Aspar, who had long recognized and made use of Leo’s talents. But Leo soon murdered his benefactor, whose influence over the court he deemed too great. He replaced Aspar with Zeno, an Isaurian general who became equally troublesome, and eventually succeeded Leo as emperor. Though he ruled in the East, Leo devoted much of his attention to the Western Roman Empire, which he tried to stabilize. His major intervention there, however, was a colossal failure: in 468 he sent an armada of 1,100 ships against the Vandals. After an initial success, which cost the Vandals 340 ships, almost the entire Roman fleet was destroyed by sabotage while in harbor a few miles from Carthage, dealing to the Romans an unfathomable military, financial and spiritual blow. Leo’s facing bust on this gold solidus, shown armored and holding a shield and spear, is typical of this late period in Roman history.

8. Romulus Augustus, Western Roman emperor A.D. 475-476. Romulus Augustus was only a child, or perhaps a teenager, when he was hailed emperor in the summer of A.D. 475. Making the appointment was his father Orestes, the Pannonian Master of Soldiers in Italy, who ousted the emperor Julius Nepos, the very man who had appointed him to his office. However, the tenures of Orestes and Romulus Augustus were brief: after about ten months as emperor, Romulus Augustus was deposed by German mercenaries led by Flavius Odovacar. The refusal of Orestes to give them vast tracts of land in Italy had sparked a revolt, and the Germans decided to take by force the land that Orestes has refused them. Though Orestes was executed late in August, 476, the rebels spared the life of Romulus Augustus on account of his youth and innocence. Instead, he was given a pension and was allowed to retire in the Bay of Naples, where he seems to have lived for at least three more decades. The young emperor is portrayed on this gold tremissis, a one-third solidus, attributed to the Rome mint.