David Vagi continues his discussion of some of the most important issuers of Roman coins in the fifth of a multi-part series. 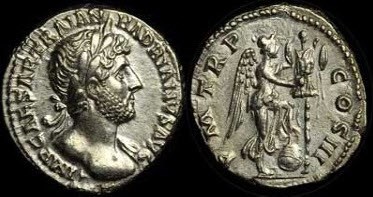 1. Roman Republican Denarius, after c. 211 B.C. This coin breaks with our guiding theme since it was struck long before famous individuals began to issue coins of their own, but it is worth taking the opportunity to recognize the approximately 350 years of Roman coinage before the empire. The coinage was quite varied in this period, and included gold, silver and base metal coins in a wide range of denominations. Shown here is a "typical" early denarius, struck starting in about 211 B.C. Many of these denarii bear the names of moneyers, the officials in charge of coinage in any particular year. This happens to be an anonymous piece from about 207 B.C. It shows on its obverse the helmeted head of the goddess Roma, and on its reverse the Dioscuri, riding into battle with lances at the ready.

2. Nero, emperor A.D. 54-68. The Julio-Claudian dynasty lasted nearly a century, and though it began with one of the most effective rulers in history (Augustus, 27 B.C to A.D. 14), it ended with one of the least capable: Nero. He is remembered for his rivalry with his mother, whom he eliminated early in his reign, and his personal excesses once he was free of her influence. He considered himself an artist of the highest order, and he tried to incorporate his artistic views into many matters that required a more practical approach. During his reign, a tragic fire swept through Rome that was so severe Nero had to extract great sums of money from the provinces to pay for the rebuilding of the capital. Eventually, revolts in the provinces toppled his regime, and he chose suicide over execution. His distinctive portrait can be seen on this silver tetradrachm struck in A.D. 63/4 at the city of Laodicea in Syria; its reverse shows the turreted and veiled city goddess, Tyche.

3. Galba, emperor A.D. 68-69. One of the provincial governors who caused Nero’s downfall was Galba, a man of great wealth and political connections who had been prominent in the empire since the reign of Augustus. He was a governor in Spain when Vindex, a governor in Gaul, revolted; not long after, a governor from North Africa did the same. Fortunately for Galba, the mere news of the outbreaks in the provinces caused Nero’s government to collapse, and by the time Galba arrived in Rome, it was his for the taking. He reigned during uneasy times, and there were fresh challenges from an insider named Otho (the governor of Lusitania who had accompanied Galba to Rome) and a governor in Germany named Vitellius. Galba might have survived if he had been more generous with his bribes, but that was not his way. Instead, he fell victim to a coup led by Otho, who had generously paid the praetorian guards. A stern, elderly portrait of Galba appears on this brass sestertius struck at the Rome Mint.

4. Valerian I, emperor A.D. 253-260. The imperial crisis, which had been gaining momentum over the last few decades, reached its peak with the capture of this emperor by the Sasanians in A.D. 260. Valerian and his son Gallienus came to power in 253 through rebellion, and both of their reigns were plagued by uprisings by subordinates and invasions by enemies along the borders. Both men’s lives ended under violent circumstances: Gallienus was murdered in a coup eight years after Valerian was treacherously captured in northwestern Mesopotamia while negotiating for his plague-ridden army. We have no idea how many years Valerian survived, though it is said that the Persian King Shapur kept him in a cage to use as a stepping-stool when mounting his horse. When he finally died, Valerian’s body was skinned, stuffed and preserved for display in Shapur’s palace. An unusually fine portrait of Valerian appears on this bronze sestertius struck early in his reign. 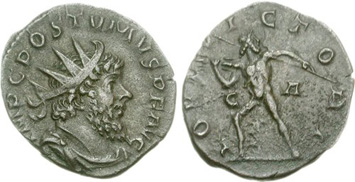 5. Postumus, Romano-Gallic emperor A.D. 260-269. At the height of the imperial crisis, A.D. 260 (when the emperor Valerian I was captured in the East), a fresh rebellion was launched in the West by Postumus, a governor in Roman Germany. Though it resulted in the creation of a separatist empire, the initial act was one of self-preservation: The Alemanni and the Franks had invaded the heart of the western part of the empire, and the panicked army hailed their own leader, Postumus, to be emperor. His regime lasted nearly a decade – an amazing feat in the chaotic West, and after his murder Postumus’ "empire" survived five more years until it was reintegrated into the empire. While the success of Postumus revealed a weakness in the empire, it did much to preserve that part of the Roman world. The rebels’ distinctive portrait appears on this double-denarius struck at Cologne. 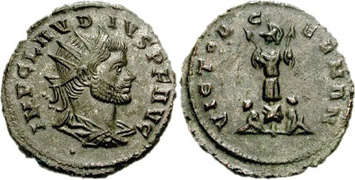 6. Claudius II, emperor A.D. 268-270. The reign of Claudius II, "Gothicus," was the turning point of Roman fortunes in the 3rd Century A.D. He assumed power in A.D. 268 upon the murder of the unfairly maligned emperor Gallienus (253-268), in whose overthrow he had participated. He waged brilliant campaigns against the Germans and the Goths, who were ravaging Roman territory. Unfortunately, on yet a third defensive campaign – this time against the Vandals – he succumbed to the plague, thus ending his short but glorious reign. He was succeeded by his less fortunate half-brother, Quintillus, who soon was murdered and replaced by the general Aurelian (270-275). Interestingly, the memory of Claudius II was more revered than any other "soldier emperor" of the age. The future emperor Constantine I “the Great” even claimed him – fictionally – as an ancestor. This billon double-denarius, with his distinctive "soldier portrait" celebrates Claudius’ victories against the Germans.

7. Vabalathus, ruler in Palmyra, A.D. 267-272. The desert oasis of Palmyra was a point of interchange for caravans bringing to the Rome Empire goods from Arabia, India and beyond. As the fortunes of Rome declined in the 250s and 260s, Palmyra and its King Odenaethus were the key defense for the Roman provinces in the East. When Odenaethus died in 267 under mysterious circumstances, control passed to one of his wives, Zenobia, and her son Vabalathus. Relations deteriorated between Rome and Palmyra until the emperor Gallienus (253-268) led an unsuccessful campaign against Zenobia and Vabalathus. In response, the Palmyrenes occupied Roman lands in the East, including Egypt. A period of stalemate followed until 272, when mother and son took Roman titles, forcing the emperor Aurelian (270-275) to lead an army against them. Aurelian was victorious and brought Zenobia and Vabalathus to Rome as trophies for his triumph. Shown here is a billon double-denarius Vabalathus struck also bearing the portrait of Aurelian.

8. Carausius, Romano-British emperor, A.D. 286/7-293. Not long after Diocletian (284-305) named Maximian (286-305) his co-emperor, a competitor emerged. Carausius was a local soldier who, to become naval commander, was appointed to clear pirates from the English Channel. Reports soon suggested he was pocketing much of the captured loot, and that he was going to be arrested and executed. Before this happened, Carausius rebelled and set up his own government in Britain and on the shore of Gaul. His new "empire" survived multiple attacks by Maximian, who in 293 appointed Constantius I as his Caesar, seemingly with the purpose of eliminating Carausius. The rebel’s reign ended after he lost his continental strongholds to Constantius and was returning to Britain, where he was murdered by his successor, Allectus, who managed to survive for another three years. This billon double-denarius shows Carausius and Spes, the Roman goddess of hope.

9. Galerius, emperor A.D. 305-311. Remembered for his zealous persecution of Christians, Galerius was hailed Caesar by Diocletian (284-305) in 293, and acted as his subordinate at various times in the Balkans and the Eastern provinces. After some initial humiliations, Galerius’ prestige grew until he had become more powerful than Diocletian, whose health was failing by the time of his abdication in 305. Galerius, however, had none of Diocletian’s genius for managing an empire, and he alienated many imperial contenders while appointing loyal, but incompetent men to high positions. He was vilified by Christian writers of the time, one of whom took great pleasure in describing the gruesome manner of his death, apparently by cancer. Shown here is an ornate billon nummus struck for Galerius after his death and deification by his former son-in-law, Maxentius.

10. Honorius, Western Roman emperor A.D. 393-423. Honorius became emperor when merely nine years old and reigned for 30 years when the western portion of the empire was under pressure on many fronts. During his reign coins were struck by no less than seven rebels who challenged his authority. Honorius apparently was little more than a figurehead, with the main source of authority being his half-Vandal Master of Soldiers, Flavius Stilicho. Tensions between East and West rose to a new level during the reign of Honorius, who was unable to contain Stilicho and was constantly under threat by Visigoths and Ostrogoths. Two of the most tragic events in Roman history – a great invasion over the frozen Rhine in 406 and the sack of Rome by Visigoths in 410 – occurred during his reign. Honorius died of natural causes at age 39, after which a usurper named Johannes seized control. The luckless emperor is portrayed on this gold solidus from the mint of Milan, in northern Italy; the reverse shows the emperor holding a labarum and trampling upon a barbarian captive.