This proof 1878 Shield Nickel looks pretty at first glance, but a more careful evaluation reveals that it’s a fake.

The old saying, "When a thief kisses you, count your teeth," can be applied to the world of business in many useful ways. And when it comes to counterfeit detection, it is also surprisingly apt, offering some very literal and practical advice.

Most classic coins display an ornamental border surrounding their rims, often consisting of beads or, more commonly, denticles — teeth-like protrusions that create the margin between the face of a coin and its edge. On proof issue coins, denticles are almost always clearly defined and sharp. Occasionally on mint state coins, they can become indistinct and mushy. Like dates and mintmarks on coins, denticles on both sides provide useful information for the counterfeit detection expert, as the differences between denticles on fake coins and real coins provide valuable evidence.

The proof 1878 Shield Nickel shown here looks attractive at first glance. In fact, this date is less seldom seen with good cameo contrast, and the richly frosted devices may make it appear to be a special find — but also suspicious. In this sense, it’s a kissing thief. This coin is masquerading as something special, but, as the saying goes, it’s time to "count your teeth." 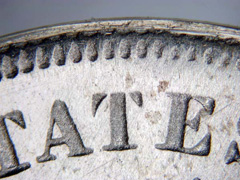 Looking at the denticles on the reverse from about 12:00 to 1:00, something unusual can be seen. The teeth are very indistinct, more like beads. The coin’s watery field area flows in between and above them, quite unlike an authentic example. The denticles should be solidly attached to the rim of the coin, and should not be shallow bumps, seen in the detail image. 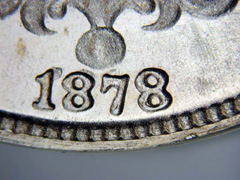 Denticle examination alone isn’t always enough to conclusively determine authenticity, and corroborating evidence will be useful. Regular followers of this column will recall an earlier lesson entitled, Pass the Test. In that article, we counseled that the date area should be examined when trying to determine if a coin is counterfeit. That advice certainly applies, so we’ll also look at the date of this 1878 Shield Nickel. The date is a mess. The second 8 in the date is wildly misshapen, and blobs of metal are visible above the 187 portion. All are strong indications that this coin is counterfeit. The denticles in this portion of the coin are a bit better, it’s worth noting.

Taken in concert, the weak denticles and misshapen date are more than enough to conclude this coin is a fake. To read other articles in NGC’s Counterfeit Detection series, see the full index on our website.