David Vagi finishes his discussion of some of the most familiar designs of ancient Greek coins in the last of a multi-part series.

1. Celts. Some of the most fascinating coins of the ancient world were struck by Celts and contemporary Iron Age cultures in Spain, Britain and Europe north of the Mediterranean rim. The Celts have long been admired for their unusual perspectives on art, which were radically different than those of neighboring civilizations. Though many original designs exist for Celtic coins, most are inspired by types of the Greeks and Romans. A perfect example of the "Picassoesque" style of many Celtic coins is this debased stater struck c.100-50 B.C. in Northwest Gaul. It shows on its obverse one human head emerging from the chin of another, and on its reverse a rider upon a human-headed horse. There is no intention to portray the subjects in realistic proportion, and stylized design elements are often disjointed or are reduced to their main structural components. 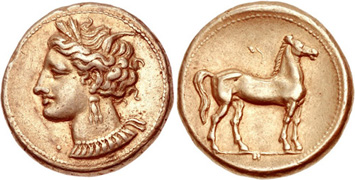 2. Carthage. The North African city of Carthage was founded by Phoenician colonists from Tyre who recognized the excellence of its harbor. It became the base of a powerful mercantile state that often was in conflict with Greeks, Etruscans and Romans (with whom the Carthaginians fought three Punic Wars). Most of their coins show the head of the goddess Tanit and a horse or horse head that often is accompanied by a palm tree. Some were struck for use in North Africa, and others in Spain, Sardinia, Sicily, Southern Italy and elsewhere in the Western Mediterranean. Their most artistic issues – usually called "Siculo-Punic" – were struck to pay their mercenary armies in Sicily. Shown here is a stater from about 300 B.C. made of electrum, an alloy of gold and silver.

3. Mauretania. In ancient times, the northwest coast of Africa was occupied by people of various cultures. In addition to local inhabitants, there were Phoenicians, Romans, Vandals, Byzantines and Muslims. In terms of coinage, the two important "local" kingdoms were Mauretania and Numidia. Also in the mix were nomadic peoples who lived further inland and were a constant threat to those who dwelled in cities and worked the fertile farmlands near the Mediterranean coast. The designs of Mauretanian and Numidian coins are often exotic and frequently portray local rulers. This silver denarius of Mauretania shows King Juba II (25 B.C.-A.D. 23/4) and Queen Cleopatra Selene. Juba II was a long-time ally of Rome’s first two emperors, Augustus and Tiberius, and his wife Cleopatra Selene was the daughter of the last Egyptian monarch, Cleopatra VII (51-30 B.C.).

4. Scythia. Scythians ruled most of the northern Black Sea coast, from the Thracian border to the Crimea. The region was rich in fish, and its hinterlands (and the steppes beyond) yielded great quantities of wheat, amber and slaves, and were the gateway to gold from the Urals. As such, the Scythians were major trading partners with the Greeks, from whom they adopted the idea of coinage. Scythian designs often are fierce and arresting, and usually are executed with skill. A perfect example is this silver drachm struck after c.350 B.C. at Panticapaeum, the most important city of the region. Its obverse shows the facing head of a mythological creature – Pan, Silenus or perhaps a Satyr – and the reverse bears a fine representation of an ox head. 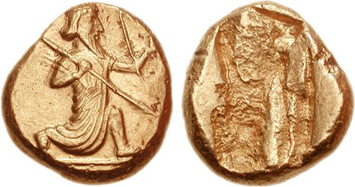 5. Persia. The Persians and the Greeks were one of the main rivals in Mediterranean world from the sixth through fourth centuries B.C. Their cultures were markedly different: Greeks of that era prided themselves on being free citizens of independent city-states, whereas the Persians were subject to a powerful monarchy. One arena for conflict was the string of Greek colonies in western Asia Minor – an area the Persians claimed as their own. Persian invasions of Greece in 490 and 480 B.C. were devastating, but in the end, ineffective, whereas the Greek invasion of Asia led in 334 B.C. by Alexander III “the Great” toppled the Persian-Achaemenid Empire. This gold daric of the late fifth or early fourth century B.C. shows the king (or a hero) in a running stance, holding a bow and spear. 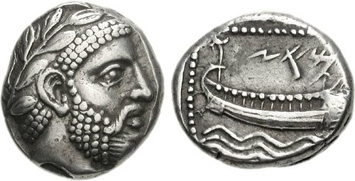 6. Phoenicia. The Phoenicians were highly skilled sailors, and they used their powerful fleet in both war and commerce. They regularly traded with close neighbors, such as Syria, Egypt and Cyprus, and sailed to the far end of the Mediterranean in search of raw materials and finished goods. In doing so, they established trading colonies, including Carthage. The coins of Phoenicia from the fifth and fourth centuries B.C. are more archaic in appearance than most contemporary Greek issues, which led early scholars to false conclusions about their antiquity. However, Phoenician coins struck after the invasion of Alexander III the Great (336-323 B.C.) largely resemble mainstream Greek coinage. A typical pre-Alexandrine issue is this silver stater of Aradus, which shows on its obverse a marine deity and on its reverse a galley beneath a Phoenician inscription.

7. Judaea. Considering the Holy Land was ruled by Persians, Greeks and Romans for most of the era of ancient coinage, it is remarkable that Jews produced important coinages of their own. Issues of the fourth century B.C. onward include the coinage of Philistia, Samaria and "Yehud," and the apex of Jewish coinage, from c.132 B.C. to A.D. 95, occurred under Hasmonean (Maccabean) and Herodian rule. Jews also struck coins for two ill-fated revolts against Rome: the Jewish War of A.D. 66-70 and the Bar Kochba War of A.D. 132-135. Silver shekels of the Jewish War are particularly historical, for it was during this conflict that Jerusalem was sacked by the general (and future emperor) Titus. The shekel illustrated here was struck in A.D. 68/69, during the third year of the war, and not long before the Second Temple was reduced.

8. Parthia. One of Rome's main foes in the East during the late Republic and the first 250 years of the Empire were the Parthians. Originally they seem to have been a nomadic people, and they only came to prominence in the mid-third century B.C. A century or more later, they were the major force in the Near East at a time when the Greek empires were in decline and Rome's interest in the region was on the rise. They are famous for their military tactics, which were highlighted by precision archery from horseback. The earliest coins in the Parthian series have portraits of fine style, but the later issues – such as this silver drachm of Vologases III (c.A.D. 105-147) – have highly stylized portraits of the kings and a formulaic reverse design and inscription.

9. Arabia. Most ancient coinage of the Arabian Peninsula is modeled after Greek prototypes – usually those of Athens or the Macedonian King Alexander III "the Great" (336-323 B.C.). Shown here is a silver "unit" of Saba, one of the major kingdoms in the south of the peninsula. In this case it copies the "new style" coinage of Athens, and was struck contemporarily with those official Athenian issues of the second and first centuries B.C. However, the wreathed male head on the obverse is an invention – replacing the helmeted head of Athena on the originals. Not only do the style and fabric of Arabian issues differ from Greek models, but usually one or more letters from the local alphabet are placed in the fields or are integrated into the designs.

10. Bactria. Perhaps the most remote outpost of Greek culture was Bactria, a kingdom based in the plateau north of the Hindu Kush range which sometimes incorporated a much larger territory. Bactria was conquered by Alexander the Great, whose pursuit of the last Persian King, Darius III, drew him ever further east; it was also the home of his famous bride, Roxana. Greek "rule" in Bactria was never more than tenuous and incomplete. Shown here is a silver tetradrachm of King Eucratides I (c.170-145 B.C.), a monarch who greatly increased the territory and prestige of his kingdom. The obverse shows his helmeted bust and reverse shows the Dioscouri on horseback, within a Greek inscription naming the king. Coins such as this show that Greek culture remained important in Bactria long after the age of Alexander.