Beginning Tuesday, May 25, 2010, all eligible coins submitted to NGC for grading will be reviewed for Plus Designation (

to coins at the high end of their assigned grade, approaching the quality requirements for the next grade. In addition to their superior technical merit, coins receiving a

must have above-average eye appeal.

to coins at the high end of their assigned grade, approaching the quality requirements for the next grade. In addition to their superior technical merit, coins receiving a

must have above-average eye appeal.

is available in combination with all grades from XF 45 to MS 68, inclusive. Coins submitted to NGC under applicable grading tiers including Economy, Early Bird, Gold Rush, Specialty Gold, Express and WalkThrough tiers are automatically examined for

during grading, and there is no additional fee or special service request.

at time of grading. The first on-site event where NGC will evaluate all coins during grading for the Plus Designation is the Long Beach Coin & Collectibles Expo, where on-site grading will be offered June 2 through June 4, 2010.

during grading. More detailed information concerning submission requirements and answers to frequently asked questions can be found on NGC's website at www.NGCcoin.com/plus

"We have been overwhelmed by the flood of support and enthusiasm for the launch of the NGC Plus Designation. For a number of years, collectors and dealers have wanted NGC to recognize premium quality-grade coins because our unique capabilities allow us to distinguish these differences with accuracy and consistency — providing credibility and consumer confidence to this segment of the market," commented Mark Salzberg, NGC chairman and grading finalizer. 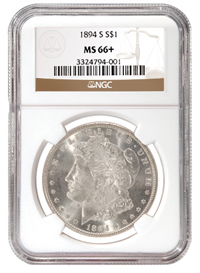 Salzberg continued, "Although we have used discriminators of premium quality internally at NGC for a number of years, the Plus Designation allows us to convey this information in a simple and straightforward way on our certification label. We listened very carefully to comments we received from throughout the numismatic community during the months that led up to this service launch, and in response we believe that we are offering our customers the best value and most-preferred services in the industry."

After first announcing the Plus Designation on March 25, NGC opened a 60-day comment period, inviting dealers and collectors to provide comments and questions. Customer feedback played a valuable role in developing this service, and additional comments are still accepted at plus@NGCcoin.com. Questions regarding submission procedures should be directed to NGC Customer Service at service@NGCcoin.com or toll-free at 1-800-NGC-COIN (642-2646).

A few website enhancements are being released in concert with the launch of the Plus Designation. Population figures of Plus Designated-coins will be reported in the NGC Census beginning on May 25, 2010. Coins graded with a

will receive a point premium in the NGC Registry. New Registry score tables will be available on the Collectors Society website on May 25, 2010.