A scarce variety, this month’s featured coin is especially attractive.

In February of 1874, Nevada’s US Senator John P. Jones introduced a bill calling for the coining of a twenty-cent piece. There did not appear to be any legitimate demand for this denomination, but the falling price of silver prompted his action in an effort to support the market for his states principal product. 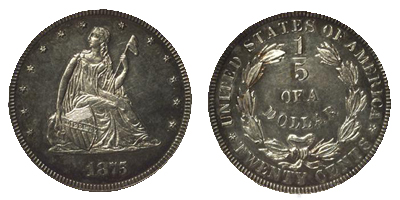 At first glance, the obverse of this pattern twenty-cent piece appears identical to the adopted type. Closer inspection reveals that its date is smaller and that LIBERTY appears in incuse letters, as opposed to the raised lettering of the production coin. The reverse of this pattern, which was coined in silver with a plain edge, is far more distinctive. A scarce variety, this near gem is an especially attractive coin. It’s a cameo piece, with its frosted devices standing out boldly from the brilliant fields. Fine toning of steel gray, gold and gunmetal blue complements an absolutely complete strike.