David Vagi continues his discussion of some of the most important issuers of Roman coins in the third of a five-part series.

1. Sulla, d. 78 B.C. After having already had an interesting career, Sulla came to prominence while in his 50s, during Italy’s Social War (91-89 B.C.) and the First Mithradatic War (88-84 B.C.). On one occasion Sulla invaded the capital itself to oust members of the opposing party, and soon after, in 82, he defended that same city from an assault by neighboring Samnites. His main platform was to erode the power held by wealthy families and the senate, believing he was more deserving of that authority. Sulla was successful, and established himself as dictator in Rome in 82 B.C. Not long after, in 79, he reluctantly forfeited his authority and soon died of disease. It is with the struggle between Sulla and Marius that we might suggest the “Imperatorial Period” of Roman history began; it would last until 31 B.C., when Octavian defeated Marc Antony and Cleopatra at the Battle of Actium. This silver denarius of c.82 B.C. depicts the head of Roma and a scene of Sulla in a triumphal chariot.

2. Pompey the Great, d. 48 B.C. Pompey’s skills were recognized early in his life, for at age 23 he earned his surname Magnus (“the Great”) while campaigning in North Africa. His independent career began in 87 B.C. when he inherited the loyalty of his father’s legions, and joined forces with Sulla to gain control of Rome. He later waged wars against fellow Romans in Africa, Etruria and Spain, and in 71 B.C. he eliminated the slave army of Spartacus. Later he defeated pirates in the eastern Mediterranean and the Pontic king Mithradates VI, and joined Crassus and Julius Caesar to form the First Triumvirate. But when Crassus died and Caesar became dangerously ambitious, Pompey fled to Greece, where Caesar eventually defeated him at the Battle of Pharsalus in 49 B.C. After the battle, Pompey sailed for Egypt seeking refuge, but instead was murdered and beheaded. Portrait coins of Pompey, such as this silver denarius issued by his youngest son Sextus Pompey, were struck in his memory.

3. Augustus, emperor 27 B.C.-A.D. 14. As Rome’s first emperor, Augustus is one of the most important figures of the Western world. He oversaw the transition of Rome from a decaying republic to a stable empire, exercising great power under one title or another for 57 years – an extraordinary tenure for a ruler at any point in history. As must be expected with someone who so profoundly changed the society and politics of his nation, his legacy is mixed, ranging from tyrant to savior. Many volumes would be required to cover his reign in detail. He struck a remarkably varied coinage at more than 150 mints, from his first issues after Julius Caesar’s murder in 44 B.C. (when he was known as Octavian) to his final issues as a 75-year-old man ready to transfer authority to his stepson Tiberius. This silver denarius, depicting an inscribed shield on its reverse, was struck at a mint in Spain in about 19/18 B.C.

4. Livia, d. A.D. 29. As the wife of Rome’s first emperor, Livia greatly influenced the affairs of state, and those of the Julio-Claudian family. Her impact on the thoughts and policies of Augustus must have been profound, for she accomplished much behind the scenes, both directly and indirectly. She outlived her husband by 15 years and remained politically active into the reign of her eldest son, Tiberius, who came to resent her meddling so greatly that he refused to meet with her, and did not even attend her funeral. The ancient sources leave us with an impression of a tireless and shrewd woman who was respected, often feared, but not loved. She appears on coins of Augustus and Tiberius, and of their successors, most commonly as a seated figure. Her most convincing portrait occurs on brass dupondii of the type shown here, struck by Tiberius in A.D. 22/23.

5. Caligula, emperor A.D. 37-41. Caligula’s poor reputation is well deserved, for his terrifying personality and perverse habits merely amplified the fact that he was an unqualified ruler. His childhood and early adulthood were traumatic, as much of his family died in dynastic inter-fighting. When he came to the throne as a young man he had no meaningful record of public or military service, yet he was welcomed as a change to the tiresome and troubled reign of his uncle Tiberius, for he was the only surviving son of the hero Germanicus. Soon after coming to power, though, he suffered a severe blow to his mental health, perhaps due to a protracted illness. Afterward his acts seem to have terrified those close to him, which eventually led to his murder in January A.D. 41. Caligula’s portrait occurs on many imperial and provincial coins, including this bronze as, struck in the first year of his reign.

6. Caracalla, emperor A.D. 198-217. Caracalla was the elder son of Septimius Severus, founder of the Severan Dynasty. Since his father was already emperor, Caracalla was appointed to the rank of Caesar by his father at age seven and he remained in power until he was murdered 22 years later. He is usually thought to have been vicious, but it is difficult to know how many of his episodes of cruelty were, in reality, acts of self defense, including the murder of his brother and co-emperor Geta. In Caracalla’s final years his health declined, as clearly did his mental stability. He came to think of himself as the reincarnation of the Macedonian King Alexander III “the Great” and was attempting to reenact his conquest of the East when he fell victim to a coup. This silver double-denarius bears an especially strong portrait of Caracalla, combined with a reverse showing Jupiter, the supreme god of the Romans. 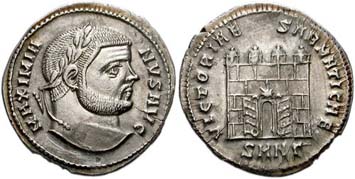 7. Maximian, emperor A.D. 286-305. Maximian owed his imperial career to his comrade Diocletian, who was hailed emperor in A.D. 284. Diocletian relied upon Maximian to restore order in the West, and he soon named him co-emperor. In the early years Maximian ruled with vigor, but over time he succumbed to the pleasures of palace life and left difficult chores to subordinates. In 305 Diocletian was ready to retire, and he insisted that Maximian also abdicate. However, when Maximian’s son revolted in 306, Maximian seized the chance to return to power. Father and son soon quarreled, and Maximian took refuge in Gaul at the court of his son’s rival Constantine I “the Great.” He soon tired of being subordinate to Constantine and in 310 he revolted only to be captured, after which he was executed or was forced to hang himself. This silver argenteus of the Nicomedia mint shows Maximian’s portrait and a gate of a fortified camp or city.

8. Valentinian I, emperor A.D. 364-375. Though historians will forever disagree over when the Roman Empire was divided between East and West, there is a good argument for February 17, A.D. 364, when the emperor Jovian died. The armies of the Eastern and Western halves of the empire found an opportunity to divide along geographical, political, religious, linguistic and cultural lines. Within 10 days of Jovian’s death a commander named Valentinian I was hailed emperor by the army, and about a month later his brother Valens was made his co-emperor in the East. Valentinian was a competent ruler who was fully occupied with the military defense of the Western provinces. Late in the year 375 the insolent attitudes of a deputation of the Quadi, a Germanic people against whom he was then prosecuting a war, caused Valentinian to die of a stroke. He was succeeded by his sons Gratian (who had been co-emperor since 367) and Valentinian II, hailed emperor five days after his father died. The elder Valentinian is portrayed on this gold solidus from the mint of Trier, which on its reverse shows the co-emperors seated beneath Victory.