[DALLAS, TX] — An awed hush fell over the Platinum Night bidding floor of Heritage Auctions' Orlando FL FUN U.S. Coin Auction on Thursday, Jan. 7, as "The Olsen Specimen" 1913 Liberty Nickel, PR 64 NGC, lived up to its billing as the most famous American coin by bringing a jaw-dropping $3,737,500. This figure is tied for the third-largest sum ever paid at auction for a single U.S. coin. 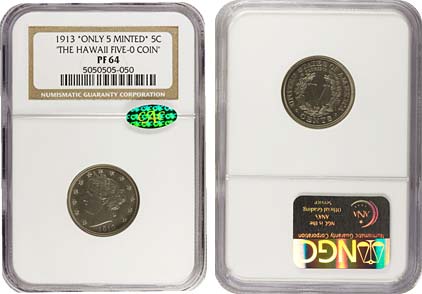 The most famous of the five known Liberty Nickels was the principal highlight in Heritage's $53 million January 2010 numismatic auctions, collectively composed of U.S. Coins and Currency at Orlando FUN and the NYINC World Coins Auction. With the 1913 nickel, Heritage sold three $1 million+ U.S. coins in the auction, only the third time this has ever been done in a single event, and this auction is the first time that all three coins hammered above the $1,000,000 mark. All prices include 15% Buyer's Premium.

"We're still continuing to see solid results in the U.S. Coin market," said Greg Rohan, President of Heritage Auctions, "despite the fluctuations of the overall economy in the last year. We expected a drop off of some kind from the record prices of two years ago, but were still surprised to see just how well everything performed. In fact, the auction exceeded our estimates by 20%. Combine that with more than 6,300 bidders and more than 93% of lots sold and you have a satisfying outcome and a strong statement on the market."

There can be no doubt that the legendary 1913 Liberty Nickel is the King of 20th Century Coins and the "The Olsen Specimen," whose provenance roster reads like a Who's Who of the rich and famous - including a famous Egyptian king and the current owner of the Los Angeles Lakers, not to mention an appearance as the centerpiece of a 1973 episode of Hawaii Five-O - is the most famous of the five known."The bidding on this coin was definitely competitive," said Rohan. "The winner is an advanced East Coast collector who, needless to say, now has the ultimate centerpiece to his collection and has assured his place in numismatic history."

For more information about Heritage Auctions, and to join and gain access to a complete record of prices realized, along with full-color, enlargeable photos of each lot, please visit www.HA.com.

This is a guest article. The thoughts and opinions in the piece are those of their author and are not necessarily the thoughts of the Certified Collectibles Group.