David Vagi continues his discussion of some of the most important issuers of Roman coins in the second of a multi-part series.

This month we advance our survey to include eight more Roman notables. Only five of these men held the title of Augustus, and one of them held no title at all, but was deified and worshipped after his ritualistic drowning in the Nile.

1. Brutus, d. 42 B.C. We’ll start with Brutus, a Roman who assumed an iconic, if somewhat conflicted, role as a defender of the Republic against monarchy. With the meteoric rise of Julius Caesar, the younger Brutus (who may have been the biological son of Caesar) sided with colleagues in the senate, and helped lead a conspiracy to murder Caesar on the Ides of March, 44 B.C. Not long afterward, Brutus, Cassius, and other conspirators were driven from Italy, after which they organized an army and a fleet in the Eastern Mediterranean. Brutus and Cassius met their fates on a battlefield at Philippi, Greece, where they were defeated by a coalition led by Marc Antony and Octavian, the man destined to be Rome’s first emperor. Though coins of Brutus often can be had for less than $1,000, an exception is this rare aureus of 42 B.C. portraying Brutus, which NGC Ancients recently graded Choice AU [STAR].

2. Agrippa, d. 12 B.C. A major factor in the success of Rome’s first emperor, Augustus, was his general Marcus Agrippa. He had been at Augustus’ side ever since he came into prominence, leading campaigns against competitors Sextus Pompey, Marc Antony and Cleopatra, as well as foreign enemies. In addition to being an outstanding battlefield general, Agrippa was a capable administrator who did much to improve the infrastructure of Rome. Agrippa was long known to be Augustus’ heir, and for the last nine years of his life he was married to Augustus’ only daughter, Julia, with whom he fathered all five of Augustus’ grandchildren. He died rather unexpectedly in 12 B.C., leaving his lifelong companion in a bind for the succession. Coins were struck for Agrippa during his lifetime (the largest issue being from Nemausus in Gaul), the most abundant are copper asses struck posthumously in his honor between A.D. 14 and 68.

3. Claudius, emperor A.D. 41-54 This emperor not only authored a number of books, but he is the subject of some famous literary works of Roman vintage, and of the modern age. In recent decades he is best known as the subject of Robert Graves’ semi-fictional accounts “Claudius the God” and “I, Claudius.” Because of his physical (and perhaps mental) disabilities, Claudius was an embarrassment to the ruling Julio-Claudian family, and it was only when the family line had been exhausted of other candidates that 50-year-old Claudius was chosen to be emperor. He received mixed reviews, but compared with his immediate predecessors, and his successor, Nero, he cannot be too harshly judged. Much progress was made during his reign, though he relied too heavily on freedmen as advisors and made disastrous choices in brides. Indeed, his last wife was his amoral niece, Agrippina Jr., who seems to have poisoned him. This silver denarius was issued soon after Claudius' death; it depicts him as a god, for he was deified by a reluctant senate.

4. Hadrian, emperor A.D. 117-138 Hadrian was fortunate to have ruled at the peak of the Roman Empire, and the beauty of his coinage attests to the indulgence he was allowed. Best known for his wander-lust, this emperor spent the better part of his reign traveling throughout Rome’s provinces, from Britain in the far West to Arabia in the East. He was not militarily aggressive, and he reduced the size of the empire to establish borders that were more practical to defend. He did, however, suffer brutal revolts in Britain and Judaea, with the latter war taking a serious toll on his regime. He was an ambitious builder, and was addicted to a life of luxury, both while traveling with his imperial entourage and while staying at his magnificent villa at Tivoli. Hadrian’s coinage is beautiful, and his portrait is often engraved in superb style. Interestingly, he was the first emperor to wear a beard, and in doing so he set a trend that would be followed by the rulers of Rome for about two centuries, until the rise of Christendom under Constantine I “the Great” (A.D. 307-337). This gold aureus struck near the end of his reign pairs Hadrian’s portrait with the personification of the river Nile reclining beside a hippopotamus. 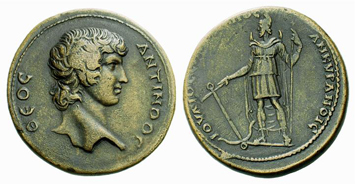 5. Antinoüs, d. A.D. 130 Despite being married to the empire's noblest woman, the emperor Hadrian's most valued companion was Antinoüs, a young man from Bithynia who he'd met while touring the Eastern provinces. The emperor was a devout homosexual who was infatuated with Greek culture – so much so that he was openly called “Greekling.” He and Antinoüs traveled together until October, A.D. 130, when the young man drowned in the Nile. There are many theories as to the cause – accident or murder? – but it likely was a ritual sacrifice intended to benefit the emperor’s ailing health. It devastated Hadrian, and cast a shadow on the remaining years of his reign. Though Antinoüs held no official title in government, Hadrian established a cult, a priesthood and founded the city of Antinoöpolis in Egypt in his honor, and in the Greek half of the empire he struck coins that portrayed his companion. On these coins Antinoüs typically is described as a hero or a god. Many are of medallion size, and clearly they were struck as keepsakes or as commemoratives for games held in his honor. Shown here is a medallion minted in Ancyra (modern Ankara, the capital of Turkey).

6. Marcus Aurelius, emperor A.D. 161-180 Known as Rome’s “philosopher emperor,” Marcus Aurelius had much to reflect upon, for he reigned at a time when the fortunes of the empire began to shift from the blissful era of the pax romana to a steady decline toward a militarized state. Rome’s borders had been comparatively stable in previous decades, but during the time of Marcus Aurelius there was renewed aggression from Persia, and a new wave of immigrants from the Asiatic steppes that forced the ‘barbarian’ nations along the northern borders to invade Roman territory. This led to annual border warfare that occupied this emperor’s life, allowing only winters as a retreat. Unlike the previous emperors, Marcus Aurelius had numerous children, though only one survived to succeed him – the wholly unsuitable Commodus, whose mindset was the virtual opposite of his dutiful, reflective father. Since Marcus Aurelius ruled for so long a period (starting in A.D. 139 with the title Caesar), his coin portraits show the full development of his portrait from an 18-year-old to a man of nearly 60 years. This nearly perfect brass sestertius was struck in A.D. 170 or 171, and thus bears a mature portrait.

7. Gallienus, emperor A.D. 253-268 Often unfairly maligned, the emperor Gallienus was one of Rome’s great defenders. He came to the throne in A.D. 253 as co-emperor with his father, Valerian I; each defended different parts of the empire until Valerian was captured by the Persians in 260. This left Gallienus to rule a vast empire surrounded by aggressive nations and filled with ambitious senators and generals who aspired to replace him. It is remarkable that he survived so long, and that the empire did not collapse entirely. The losses during this period, however, were staggering: most of the Asiatic territories fell to Palmyra, an emboldened ally of Rome, and the westernmost provinces (principally modern Britain, Germany, France and Spain) fell into the hands of a frontier general named Postumus, who established the Romano-Gallic Empire. All that remained was the central empire, which Gallienus defended until he fell victim to a murder conspiracy, seemingly led by Claudius II “Gothicus,” his cavalry commander and successor to the throne. An artful portrait of Gallienus appears on this bronze sestertius struck early in his reign.

8. Theodosius I “the Great,” emperor A.D. 379-395 The son of a renowned general, Theodosius was in early retirement in Spain when news arrived in the summer of A.D. 378 that perhaps two thirds of the Roman army in the East had been massacred by the Visigoths at Adrianople. Theodosius was called back into service by his cousin Gratian, the emperor in the West, for his co-emperor in the East, Valens, had fallen in the ambush. As the new emperor of the East, Theodosius took extraordinary measures to secure his empire, including raising taxes immensely and making humbling concessions to barbarian nations. With his plate already full, Theodosius on two occasions had to lead an army to the West to defeat usurpers who had murdered the rightful Western emperors Gratian and Valentinian II. During the last few months of his life, Theodosius became sole emperor of the Roman world, not long afterward he died of natural causes. This gold solidus was struck at Milan in Northern Italy, the city where Theodosius was residing at the time of his passing.