David Vagi continues his discussion of the designs of select ancient Greek coins in the second of a multi-part series.

With this article we advance in our survey of Greek silver coins to Southern Italy and Sicily, a region the Greeks called Magna Graecia (“Greater Greece”). The area was colonized aggressively by the Greeks from the 8th to the 5th Centuries B.C., and these settlers imported many of the cultural habits of their homeland, which included coinage.

Just as in Greece, the basic political and social unit in Magna Graecia was the city (the polis), and most every coin was struck for an individual city. Co-existing with the Greek colonists in Southern Italy and Sicily were people from other cultures, most of which had occupied these lands long before the Greeks arrived. Among them were the Sican, Sicel and Elymian peoples of Sicily, and the Samnites, Etruscans, Sabines, Lucani, Bruttii of the Italian peninsula.

However, the most domineering cultures in the region were the Romans and the Carthaginians, who fought hard against Greeks and the indigenous peoples; they also battled each other, culminating in three “Punic Wars.” By 31 B.C., after centuries of relentless struggle, the Romans emerged victorious over all regional foes, and extended their influence over the entire Mediterranean basin, relegating the once-powerful Greeks to mere Roman subjects.

Ten coins have been chosen to represent Magna Graecia. The date ranges shown reflect the period for the entire series, though individual coins can often be dated more precisely.

1. Campania, Neapolis. Silver Didrachm, c.440-250 B.C. Among the most familiar coin types of Southern Italy is the didrachm of Neapolis (“new city”), a Greek colony founded in 470 B.C. at the site of modern Naples. They show on their obverse the head of a nymph, and on their reverse a man-headed bull, usually crowned by Nike. The style of engraving advances over time and the entire series can be collected on this basis alone. The type was also widely used for silver and bronze coins produced at nearby cities, such as Hyria, Phistelia, Cales, Nola and Suessa Aurunca. The nymph seems to be Parthenope, the daughter of the river-god Achelous, the mythological creature shown on the reverse.

2. Calabria, Taras. Silver Didrachm, c.425-209 B.C. One of the great cities of Magna Graecia was Taras (known to the Romans as Tarentum), located within the heel on the “boot” of Italy. The classic type shows on the obverse a horse and rider, and on the reverse a boy riding a dolphin; he may be the legendary founder of the city, the boy Taras, or Phalanthos, the son of Poseidon. There are hundreds of varieties of this basic design formula, and the style of the artistry can be magnificent. The staters of Corinth and her colonies often were used as the planchet for the staters of Taras, and on some occasions traces of the Corinthian Pegasus can be seen if the overstrike was not complete.

3. Lucania, Metapontum. Silver Stater, c.430-280 B.C. The coinage of Metapontum, a city along the instep of the Italian boot, began in about 540 B.C. as broad, thin silver coins struck with form-fitting dies that produced the design of a grain ear in relief on the obverse and in incuse on the reverse. This “badge” of the city remained on the later coinages as a standard reverse type that was paired with numerous obverses – principally the heads of gods and heroes. The two main subjects are the goddess Demeter and the city founder Leucippus; other portraits include Nike, Heracles, Dionysus and Zeus. As with the didrachms of Tarentum, this recurring composition is made interesting by the different subjects and the style of engraving.

4. Lucania, Thurium. Silver Stater, c.443-280 B.C. Thurium staters with the head of Athena and a bull would have been a familiar sight to merchants in Southern Italy, especially in the 4th Century B.C., when this coastal city was at its peak of prosperity. The design is consistent throughout the series, with only the details varying. Notably, on the earliest pieces the helmet worn by Athena is decorated with a laurel wreath and the bull appears merely to be walking with its head lowered. The details become more intricate and the design more energized on the later issues, on which the bull is charging and Athena’s helmet is decorated with a figure of Scylla, a fearsome creature who harassed sailors as they passed though a narrow channel usually identified as the Strait of Messina that separates Italy and Sicily.

5. Lucania, Velia. Silver Stater, c.440-280 B.C. A port city along the Tyrrhenian Sea, Velia issued a varied and artistic coinage. The earliest coins were struck on thick, narrow planchets, and later issues were struck on increasingly broad, round flans. A few unusual issues aside, most Velian staters show on their obverse the head of Athena wearing a helmet with a great variety of decorations, including a laurel wreath, a wing, a chariot, a dolphin, a griffin and the creature Scylla. The reverse usually shows a lion in a variety of poses; typically he is prowling, but other times he stands with his head more erect. Major varieties of the reverse design include a lion attacking a stag, gnawing on prey, or walking before a palm tree.

6. Bruttium, Terina. Silver Stater, c.460-356 B.C. One of the most beautiful series of coins from Southern Italy was produced at Terina, a city on the western shore of the peninsula. The design of these coins is fairly consistent, with the head of a young woman (perhaps the city nymph) on the obverse and Nike on the reverse. But that is where the similarity ends, for there is a wide range of styles and compositions with most of them being the work of gifted artists who clearly were given some latitude for performing their work. Though Nike sometimes strikes a different pose, on staters from the main series she is usually shown seated on a stool, a water vessel (a hydria) or a low pillar (a cippus), holding a wreath, a caduceus or a bird.

7. Sicily, Acragas. Silver Didrachm, c.510-470 B.C. A rival to Syracuse was Acragas, a magnificent city that towered near the southern coast of Sicily. The design for its main silver coinage was a standing eagle paired with a crab. The power of this composition is the simplicity of the types, which are ideally suited to the round frame of a coin planchet. The design was used for didrachms mainly from c.510-470 B.C. (with some rare pieces being struck as late as 440 B.C.), and was used for tetradrachms until about 430 B.C. After about 425 B.C. the tetradrachms became showcases for inventive die engraving, with some (along with a single issue of decadrachms) ranking as true masterpieces of Greek coinage. 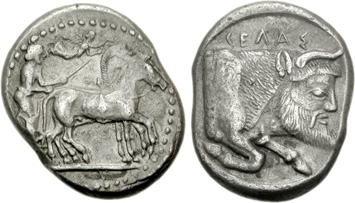 8. Sicily, Gela. Silver Tetradrachm, c.480-405 B.C. An artistic series of silver tetradrachms was produced at Gela, a city on the southern shore of Sicily, in a 75-year period before it was destroyed by the Carthaginians in 405 B.C. Most pieces show on their obverse a chariot drawn by four horses and on their reverse the forepart of a river-god in the form of a man-headed bull. There are many styles of engraving and varieties of the main design, including the bull shown in full-form and the bull being crowned by Nike. Much like with the tetradrachms of Syracuse, the greatest challenge with this series is finding coins struck with fresh obverse dies so that the chariot design can be appreciated to its fullest.

9. Sicily, Messana. Silver Tetradrachm, c.480-400 B.C. Messana originally was named Zancle because of its sickle-shaped harbor, and it prospered for more than two centuries before in 490/89 it was captured by the tyrant Anaxilas, who renamed it Messana and populated it with Greek arrivals from the East. The standard tetradrachms show on their obverse a chariot drawn by two mules and on their reverse a bounding hare. The chariot seems to reference a victory at the Olympic Games by Anaxilas, and the hare reflects the worship of Pan, a god native to the tyrant’s former homeland in the Peloponnesus. The stylistic development in the series is easy to follow, and many different symbols appear as adjuncts to the main types.

10. Syracuse Silver Tetradrachm c. 485-390 B.C. The most important city on Sicily was Syracuse, which issued large quantities of silver tetradrachms in the 5th Century and beyond. The earliest coins from the main issue show on the obverse a chariot above which a hovering Nike crowns the charioteer or the horses, and on their reverse shows the head of the local goddess Artemis-Arethusa encircled by the city name and four dolphins. The concept of the head being the reverse derives from the earliest tetradrachms, which used a chariot as the obverse design. A main attraction of the later tetradrachms, struck after c.415 B.C., is the use of fine style dies that often were signed by the artist.