Ancients: Getting Started with Ancient Coins

This month, David Vagi explains the many great joys and exciting opportunities of ancient coin collecting.

The ancient world witnessed the rise and fall of great empires and saw the foundation of Western civilization by the Greeks and Romans. It’s hard to imagine that their accomplishments were largely forgotten for about one thousand years during the Dark Ages and Medieval period, only to be "rediscovered" during the Renaissance — a tradition that we are fortunate to have inherited today.

Ancient coins can appear to be hopelessly complex, preventing many from getting started on what could be the most rewarding collecting experience of their lives. Since we owe so much of our culture to the ancient Greeks and Romans, it’s not surprising that we are inclined to collect their artifacts.

We’ll start with the basics. "Ancient coins," or "ancients," are terms that loosely apply to all coins of the Western world produced from about 650 BC to about AD 480. Ancients were struck in the large swath of land from Britain to the border of India, which stretched as far north as Germany and as far south as the Mediterranean shore of Africa.

With such a broad definition, you may ask what doesn’t ancients include? Geographically, it does not include the contemporary ancient coinages of India, China and other regions of the Far East. It also does not include coinages struck after about 500 AD, except for those of the Byzantine Empire, the successor to the Roman Empire. Because they continue the last issues of Rome, Byzantine coins are avidly sought by ancients collectors. 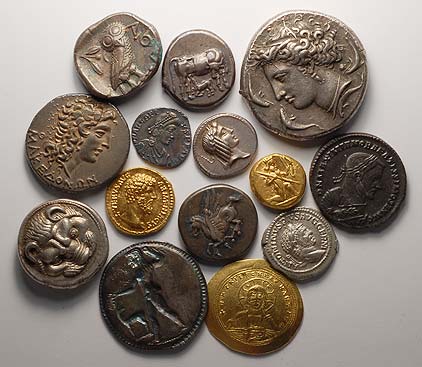 The main division of pre-AD 500 coins is between Greek and Roman. One useful generalization is that people often collect Roman coins for history and Greek coins for art. However, there are many exceptions to this rule, and the fact that both areas have exceptional portrait coins creates a dilemma if that is your interest.

What is it? What’s it worth?

Fundamental questions such as "What is it?" and "What’s it worth?" often create a barrier to getting started. The first concern is largely resolved by coins that have been graded by NGC Ancients because such coins are attributed in detail. Value, as always, is more of an open question, but many are surprised to learn how affordable ancient coins can be.

There are general price guides, but no real equivalent to the Grey Sheet, the Red Book or Krause-Mishler World coin catalogs. Ancients are a lot like antiques, and knowing what to pay is a matter of participating in the market, receiving good advice and learning from experience.

Are ancient coins affordable? The short answer is a resounding Yes! A meaningful, attractive collection of historic coins easily can be assembled for between $25 and $250 per coin. If you spend more, you'll find an even greater variety of types.

The finest and rarest ancient coins — though expensive — still bring only a fraction of comparable US coins, and bargain basement ancients can still be found for less than $10 each.

Ancients collectors rarely think in terms of a "complete set," and there are no widely distributed coin boards to encourage that pursuit. So if you're determined to get a complete set, and you have only a limited budget, you will need to define an area and stick with it. But this is harder than it might seem, for the tremendous beauty and diversity of Ancient coins will invariably lead your eye astray. 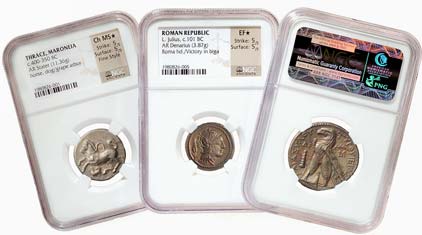