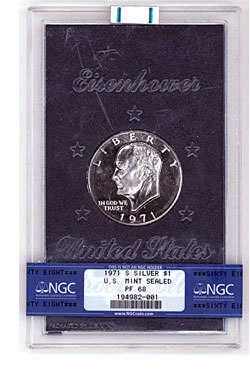 By popular demand, NGC is now grading silver-clad proof Eisenhower Dollars still sealed in their original U. S. Mint rigid holders. This program includes the silver-clad dollars of 1971-74 coined as proofs by the San Francisco Mint, popularly known as “brown box” Ikes for the simulated wood cardboard boxes in which they were delivered by the Mint.

As the rigid plastic holders for this series of coins have the same properties and dimensions as the GSA-issued silver dollars already being graded by NGC, it was a natural extension to include the popular brown box Ikes.

Legislation passed at the end of 1970 authorized the coining of dollar coins for circulation for the first time since 1935. The new coin honored five-star Army General and U. S. President Dwight David Eisenhower on its obverse, while the reverse featured the logo of Apollo XI, mankind’s first visit to the moon in July of 1969. Both sides were the work of U. S. Mint Chief Engraver Frank Gasparro.

Circulating dollars were issued in November, 1971 and were minted in the same copper-nickel-clad composition used for the dime and quarter since 1965. Also included in this legislation was a non-circulating, silver-clad version of the Eisenhower Dollar for sale to collectors. Like the half dollars of 1965-70, these coins were made from a three-layered strip. The two outer layers were composed of .800 silver and .200 copper, bonded to a center strip of .209 silver and .791 copper, for a net silver content of .400 fine.

Both uncirculated and proof editions of the silver-clad dollar were coined by the San Francisco Mint from 1971 through 1974, when the program was interrupted by the special bicentennial coinage. The uncirculated dollars were sold for $3 apiece and packaged in a transparent pliofilm envelope that was then inserted into a navy blue outer envelope. The silver-clad proof dollars were sold to collectors encased in a transparent, rigid plastic holder. This fit into a red flocked bed that was held by a cardboard box with simulated woodgrain finish. An outer sleeve made of the same cardboard and displaying a gold, blindstamped seal was slipped over the inner box to complete the presentation. Priced at $10, a portion of the proceeds were directed to Eisenhower College, an institution that later ceased operation.

Following the nation's bicentennial, when the silver-clad dollar was offered only in three-piece sets that included the quarter and half dollars, the coining of silver-clad dollars was discontinued. The Eisenhower Dollar went out of production altogether after 1978, and this left only four dates of “brown box” Ikes for collectors. In recent years these have become very popular, particularly when found in their original U. S. Mint packaging.

Due to this popularity, NGC will now grade proof, silver-clad Ike Dollars still in their rigid, plastic holders. A tamper-evident label bearing the coin’s date, mint, grade and identification number will be wrapped around the mint holder as shown in the attached illustration. Another seal will be placed across the top of the holder as a further safeguard against tampering. Because NGC does not seal these coins itself, however, the grades assigned are offered simply as a service to collectors and dealers, and no grading guarantee will apply.

Brown Ikes may be submitted to NGC under any of its applicable tiers, including the low-cost Modern Tier. The usual fees and minimum quantities will apply, and these coins must be submitted on invoices separate from other submissions. Those interested in making bulk submissions should call NGC for rates and instructions. Since NGC cannot return the outer packaging, such as the red liner and brown box, submitters should send NGC only the rigid plastic holders containing the coins.