Coins in Original Holders of Sale 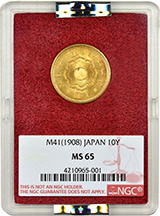 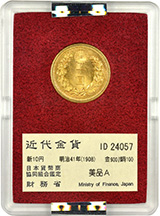 NGC provides a certification option for gold coins auctioned by the Ministry of Finance of Japan. In order to preserve the unique heritage and pedigree, NGC grades these coins while they are still sealed within their original holders of issue. Tamper-evident labels and holograms are then applied to the holders. NGC offers a similar program for Silver Dollars sold by the US General Services Administration (GSA) in a series of auctions that were held between 1973 and 1980. The Japanese government conducted a series of auctions from 2005 through 2007 that included more than 30,000 gold coins, struck between 1870 and 1930, of 5, 10 and 20 Yen denominations.

Each of the coins sold was encapsulated by the Ministry in a rigid plastic holder with a red core, each bearing a unique serial number that corresponds to its plate and lot number in the full-color auction catalogues. The original tags remain visible following certification and labeling by NGC, as NGC's certificates will be attached to the opposite side of the holders, beneath the coins' obverses.

NGC will provide the same information that it does for its normal grading services, and Meiji, Taisho and Showa dates are provided in addition to their Common Era year of issue. This information appears on a tamper-evident label beneath the obverse of the coin. Holographic wraps will also be placed around the top and bottom of the rigid Japan Ministry of Finance holder. This feature will serve to discourage opening of the holder, but because these coins are not in NGC holders, NGC cannot guarantee the grades it applies to these Japan Ministry of Finance coins.

Coins can be submitted under World teirs at regular pricing for normal turnaround times. Japan Ministry of Finance coins should be submitted on their own submission invoice without coins requiring any other services. Five or more coins valued at less than $3,000 can be submitted under NGC's World Gold tier with a five-day estimated turnaround time for just $30 per coin. Coins valued at more than $3,000 must be sent under a higher tier.