David W. Lange's new book explores the two popular lines of coin albums. For a limited time, the book is available for a special pre-publication price. 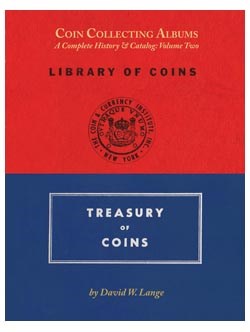 Numismatic researcher and author David W. Lange has written a new book that is being published by his own imprint, PennyBoard Press.™ Listed at $49.95, this deluxe, hardcover, 144-page book is being offered at the pre-publication price of $45 until May 1, the expected date of delivery. Shipping is $10 for priority mail within a sturdy box.

Titled Coin Collecting Albums – A Complete History & Catalog: Volume Two, Library of Coins and Treasury of Coins, this book reveals the story behind perhaps the most popular line of coin albums ever produced. Issued from 1959 to 1971, the Library of Coins albums were notable for their extensive list of titles that included all United States coin series by date, mint and varieties, with the exception of gold coins. A complete roster of albums for Canada’s decimal coinage was also offered. No other albums were so thorough in their coverage, and they were the brand of choice for all advanced coin collectors. The brainchild of famed numismatist and dealer Robert Friedberg, these albums were sold primarily through his chain of coin hobby counters that were operated in dozens of department stores around the country from the 1940s until as recently as the 1990s.

Also detailed in this book is the lesser known line of junior coin albums for beginners that Friedberg marketed as the Treasury of Coins. Though never as popular as the LOC, the TOC albums have emerged as rarities today and are eminently collectable. Indeed, all of the coin albums produced by Friedberg’s publishing division, The Coin and Currency Institute, remain desirable today. The LOC albums are still sought by veteran collectors for the display of their coins, as no comparable albums are currently in production, while the TOC albums are desired as collectors’ items in their own right by enthusiasts such as the author of this book.

All titles, editions and varieties of each album are fully described and numbered in this book, which includes a 64-page color section illustrating all the products put out by The Coin and Currency Institute. It is a deluxe, hardcover reference similar in quality to Lange’s acclaimed Volume One, which studied the National Coin Album and all of its associated products.

David W. Lange’s new book features much more than simply a catalog of coin albums. Also found within its covers is a biography of Robert Friedberg and his family, as well as histories of his two businesses, Capitol Coin Company and the aforementioned Coin and Currency Institute. The latter still operates under the presidency of Robert’s elder son, Arthur Friedberg, and it’s known for several landmark books that remain in print to this day.

In celebration of his new book, Lange is offering reduced prices for the two previous titles published by his own PennyBoard Press.™ Coin Collecting Albums – A Complete History & Catalog: Volume One, The National Coin Album & Related Products of Beistle, Raymond & Meghrig, published at $75, is now just $49.95. Like the new volume, this nearly 300-page book is a deluxe, hardcover publication that is fully illustrated, including 80 pages in color. Coin Collecting Boards of the 1930s & 1940s: A Complete History, Catalog and Value Guide, published at $39.95, is now being offered at just $19.95.

A collector of coin boards and albums for 35 years, David W. Lange is best known as Research Director for Numismatic Guaranty Corporation in Sarasota, Florida, as well as the author of six popular books on United States coinage and US Mint history. His column, “USA Coin Album,” appears monthly in The Numismatist, the official magazine of the American Numismatic Association.

All books purchased from David W. Lange will be signed, and personalized inscriptions are available upon request. Payment may be made by check made out to David W. Lange or via PayPal to langedw@msn.com.

David W. Lange may be contacted at POB 110022, Lakewood Ranch, FL 34211 or by email at langedw@msn.com. His website address is www.coincollectingboards.com, and from this site he also buys and sells vintage coin boards and folders. A new website for his publishing imprint, www.pennyboardpress.com, is currently under preparation.