Ancient coins with illustrious pedigrees often are submitted to NGC Ancients for grading and encapsulation. Usually the submitter is aware of the pedigree and requests its inclusion on the label. However, in some cases we uncover a lost pedigree and are able to share with the submitter our fortunate discovery.

Recently we were identifying and grading a Celtic silver tetradrachm that had ‘cabinet tone’ suggesting it was from an old collection. It was of a rare and unusual type that copies the coins of Damastium (Damastion), a city in Western Greece. Even the normal coins of this city are crude, so distinguishing the Celtic imitations from the regular issues is especially difficult. 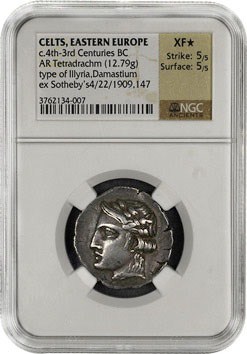 The obverse shows a highly stylized head of the Greek god Apollo wearing a laurel wreath. The reverse shows an ornate tripod flanked by the somewhat poorly executed inscription ΔAMAΣTINΩN, meaning “(coin) of the people of Damastium.”

Research began with the standard reference The Coinage of Damastion and the Lesser Coinages of the Illyro-Paeonian Region by J. M. F. May, published in 1939 at the Oxford University Press. On plate 8 of this work an image of the very coin (coin 100a) submitted to NGC was found.

The coin belongs to May’s group IX, comprised of several coins which May says, “…deserve separate treatment on account of the remarkable style of their reverse types and the equally remarkable inscriptions found on them.” May notes that the reverse designs and inscriptions in this group begin somewhat normally (as with this coin, 100a) but that they “…suddenly develop into completely barbaric conceptions….”

May lists three special notations for coin 100a:

The first refers to the important private collection of Henri de Nanteuil, published in two volumes in Paris in 1925 by Jules Florange and Louis Ciani. In that work, Collection de monnaies grecques, this coin is listed as number 862 and is illustrated on plate LII. 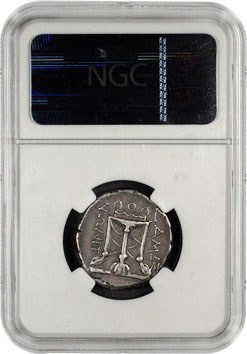 The second refers to the most important reference work on Greek coins from the early 20th Century, Traité des monnaies grecques et romaines, in which this coin is listed as number 397 in volume IV of part II and is illustrated as figure 15 on plate cclxxxv. This work was published in nine volumes of text and plates from 1901 to 1932, based on the work of Ernest Babelon, curator of coins at the Cabinet des Médailles in Paris. The section of Traité in which this Celtic coin is cited was published in 1926, more than two years after Babelon had died. Traité includes a notation that the coin belonged to Henri de Nanteuil. Though this coin never was in the collection of the Cabinet des Médailles, many of de Nanteuil’s coins were cited and illustrated in Traité because of their value to researchers.

The third notation refers to this coin as having once been in the collection of Professor L. White-King, which was sold at auction by Sotheby’s in London on April 22 and 23, 1909 (this coin, lot 147, was sold on April 22).

Though discovering this coin’s pedigree was of great interest there is still more to the story. The coin was described in May’s study as weighing 13.25 grams, whereas the coin in NGC’s possession – undoubtedly the same coin illustrated by May – actually weighed 12.79 grams.

Even in the best of references there are mistakes and typographical errors, so further research was required. The first step was Babelon’s Traité, where the coin also is listed with a weight of 13.25 grams. This obviously was the source of the weight cited by May in his specialized study published some 15 years later.

In the de Nanteuil collection, published in 1925, a year before the relevant part of Traité, the weight of this coin is listed as 12.73 grams. Though not a precise match for the weight recorded at NGC, it was much closer than the one recorded in Traité and May. The de Nanteuil catalog would have been available to May when he composed his study; he presumably saw the discrepancy and chose to adopt the weight listed in Traité.

The mystery finally was solved upon consulting the earliest recorded provenance, the 1909 sale of the Professor L. White-King collection. In that catalog, Sotheby’s describes the coin as weighing 197.5 grains, the equivalent of 12.80 grams, a nearly perfect match for the 12.79 grams recorded by NGC.